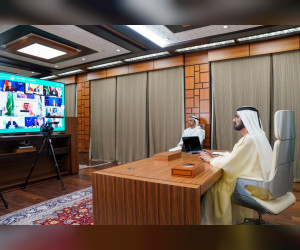 DUBAI, 22nd November, 2020 (WAM) — His Highness Sheikh Mohammed bin Rashid Al Maktoum, Vice President, Prime Minister and Ruler of Dubai,participated in the concluding session of the G20 Riyadh Summit, organised virtually by Saudi Arabia under the patronage of the Custodian of the Two Holy Mosques King Salman bin Abdulaziz Al Saud. The theme of the Summit was ‘Realising the Opportunities of the 21st Century for All’.
The UAE delegation that took part in the virtual G20 Riyadh Summit included H.H. Sheikh Abdullah bin Zayed Al Nahyan, Minister of Foreign Affairs and International Cooperation and a number of ministers.
His Highness Sheikh Mohammed bin Rashid Al Maktoum thanked King Salman bin Abdulaziz and the Crown Prince of Saudi Arabia His Highness Prince Mohammed bin Salman Al Saud for hosting an exceptional virtual summit. His Highness highlighted the Kingdom of Saudi Arabia’s key role in promoting international efforts to find solutions to major global challenges.
The UAE Vice President praised Saudi Arabia's efforts under the leadership of the Custodian of the Two Holy Mosques and the follow-up of Crown Prince Mohammed bin Salman to implement the Kingdom's Vision 2030, which is aligned with the G20’s main goals of achieving macroeconomic stability, sustainable development, the empowerment of women, supporting human capital and facilitating trade and investment flows.
Sheikh Mohammed stressed the importance of discussing collective global action to address the current challenges facing the world, notably the COVID-19 pandemic. He also pointed out the significance of exploring ways to boost cooperation between G20 member states for the betterment of humanity by accelerating development opportunities in the post-pandemic phase.
"Cooperation is an existential necessity for humankind because we share the same destiny," H.H. Sheikh Mohammed affirmed.
Common global issues such as climate change, low-cost education and food and water security to name a few, must be addressed by the global community with steadfast determination," he added.
His Highness stressed that the UAE continues to have a clear and consistent position on global cooperation and will support all international efforts to overcome challenges faced by the world. He underscored the UAE's full commitment to supporting all endeavours to promote the welfare of humankind, especially efforts to overcome the COVID-19 pandemic that has hindered the course of global development.
H.H. Sheikh Mohammed hoped to welcome the leaders of the G20 at Expo 2020 in Dubai, which is scheduled to open in October next year. "The UAE is looking forward to welcoming you next year to Expo 2020, which will see the participation of more than 190 countries," HH Sheikh Mohammed concluded.
Sessions on the first day of the virtual Summit addressed pandemic preparedness and response; and building an inclusive sustainable and resilient future.
The UAE participated in the summit along with G20 member countries. Featured at the Summit were heads of invited states and representatives of international organisations, including Food and Agriculture Organisation (FAO), the Financial Stability Board (FSB), the International Labour Organisation (ILO), the International Monetary Fund (IMF), the Organisation for Economic Cooperation and Development (OECD), the United Nations (UN), the World Bank Group (WBG), the World Health Organisation (WHO) and the World Trade Organisation (WTO).