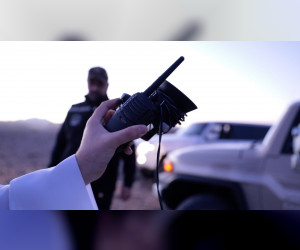 SHARJAH, 21st November, 2020 (WAM) — The teams of the External Inspection Section at the Environment and Protected Areas Authority, EPAA, have achieved remarkable success in controlling and confiscating devices with bird sounds despite the challenges and risks.
Hana Saif Al Suwaidi, Chairperson of the Environment and Protected Areas Authority, said, "The External Inspection Department teams face many challenges and risks during the seizure and confiscation of these devices during the migration season, but they are working to address them efficiently and competently."
She pointed out that the migration season for this year began last October, and continued until the first half of November, with all land areas, and gravel areas, in addition to mountainous areas covered. As per Al Suwaidi, EPAA issued a prepared plan, procedures and instructions to ensure that all the vital areas in which the devices are placed and confiscated are covered to reduce this phenomenon.
Among the most prominent challenges facing the teams is the "fog and rain" weather, which hinders movement due to poor visibility. The terrain of the wilderness areas, dunes, as well as mountain roads and rugged roads, as this often leads to bursting of tyres due to stones, slips and vehicle deviation from its route. In addition to air, dust and low visibility, as inspectors cannot check the locations of the devices, cold weather impacts the operation as temperatures range from 13 degrees Celsius, and sometimes reach 10 degrees Celsius or less.
The inspection and follow-up teams face several dangers, related to devices on the top of Ghaf and Samar trees. Inspectors are forced to climb over trees to confiscate the devices. Some devices are placed under some plants under which poisonous snakes and harmful insects are found. Also, some of these plants are thorny, often with nails placed near the devices to impede the movement of inspectors and cause injury.
Often, locking traps are placed next to the device that lock on the inspector’s hand. Devices are also located in boxes and cages and locked. The devices are installed on the wadi’s edges leaving the inspectors exposed to the risk of falling, while at times they are tied with barbed wire.
Despite these risks and challenges, inspection teams work to control and confiscate these devices. The number of confiscations for the entry season for October last year reached 1,869, while the number of confiscations of devices for October last year was 768.
The inspections and periodic follow-ups ensure the implementation of the Executive Council decisions on preventing environmental degradation of the wilderness, preserving wildlife, preventing distortion of wild and mountainous areas, preventing the use of devices and ensuring controls. The council applies Federal Law No. (11) of 2002 on the regulation and control of international trade in endangered animals and plants, and Federal Law (22) of 2016 regulating the possession of dangerous and predatory animals.