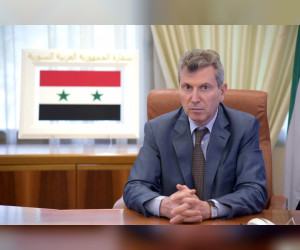 ABU DHABI, 18th November, 2020 (WAM) — The Syrian ambassador here thanked the UAE's hosting of his country's football national team camp, hailing the ongoing sports cooperation between the two nations as conducive to cementing relations between their peoples.
"I was closely following up the Syrian national football team during their camp in Dubai and felt their appreciation of the warmth and hospitality they were received under the current circumstances," ambassador Ghassan Abbas said in a statement.
He noted the significant efforts made by all relevant Emirati departments to ensure the best possible level of logistical and service support for the Syrian team's training, accommodation and transportation during their games with the Jordanian and Uzbek football teams.
He wished success for the UAE and Syrian teams during the joint 2022 FIFA World Cup and Asian Cup qualifiers.