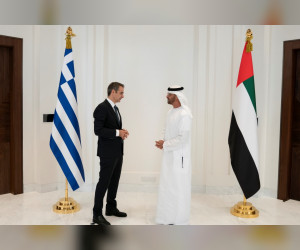 ABU DHABI, 18th November, 2020 (WAM) — His Highness Sheikh Mohamed bin Zayed Al Nahyan, Crown Prince of Abu Dhabi and Deputy Supreme Commander of the UAE Armed Forces, received Kyriakos Mitsotakis, Prime Minister of Greece.
During the meeting, which took place at Al Shati Palace in Abu Dhabi, His Highness Sheikh Mohamed bin Zayed welcomed Mitsotakis and his delegation, and both sides discussed the distinguished relations between the UAE and Greece and ways of developing and consolidate their joint interests in all areas, in addition to several regional and international issues of mutual concern.
They also highlighted multiple areas of cooperation between the UAE and Greece and promising development opportunities, most notably in the areas of investment, commerce, politics, culture and defence. Thereafter, then discussed the coronavirus pandemic and the efforts of the international community to contain its humanitarian and economic repercussions.
His Highness Sheikh Mohamed and Mitsotakis exchanged their opinions on regional and international issues that concern both countries, most notably the developments in the East Mediterranean.
Both sides affirmed the distinguished relations between their countries, which are based on a strong political will and their ongoing cooperation while agreeing on many topics related to finding peaceful resolutions to the conflicts and crises witnessed by the region, and driving their diplomatic efforts to achieve the aspirations of their peoples for peace, prosperity and development, as well as for security and stability in the region and the rest of the world.
H.H. Sheikh Mohamed stated that promoting dialogue, peaceful actions, respect for the sovereignty of countries and not interfering in their internal affairs is the correct way to resolve disputes in the region, noting that the UAE is always working to establish peace.
The UAE is closely monitoring the developments in the East Mediterranean, given its importance to regional and international stability and peace, he added, stressing that terrorism is the most serious threat to international peace and development, and noting that the UAE is supporting tolerance and coexistence and denouncing the exploitation of religious slogans to promote hate speech.
Mitsotakis lauded the bilateral relations between the two countries and their overall cooperation while highlighting the keenness of his country to enhance its coordination with the UAE, and praising the UAE’s role in supporting Greece’s healthcare sectors in combatting the coronavirus pandemic.
He praised the initiatives launched by the UAE to instill values of peaceful co-existence and tolerance among peoples, particularly during times of crises.
He also lauded the historic peace accord signed between the UAE and Israel and its role in strengthening regional security and stability and in opening new avenues for the countries of the region.
The meeting was attended by H.H. Sheikh Tahnoun bin Zayed Al Nahyan, National Security Adviser, H.H. Sheikh Mansour bin Zayed Al Nahyan, Deputy Prime Minister and Minister of Presidential Affairs, H.H. Sheikh Abdullah bin Zayed Al Nahyan, Minister of Foreign Affairs and International Cooperation, Dr. Sultan bin Ahmed Al Jaber, Minister of Industry and Advanced Technology, Mohamed Meer Alraeesi, UAE Ambassador to Greece and Mohammed Mubarak Al Mazrouei, Under-secretary of the Abu Dhabi Crown Prince's Court.
From the Greek side, it was attended by Nikos Dendias, Minister of Foreign Affairs, Adonis Georgiadis, Minister of Development and Investments, Costas Frangoyiannis, Deputy Minister of Foreign Affairs, and Dionyssios Zois, Greek Ambassador to the UAE.