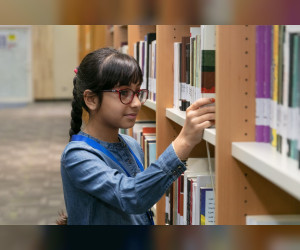 ABU DHABI, 18th November, 2020 (WAM) — MAKTABA, the library management department of the Department of Culture and Tourism – Abu Dhabi, DCT Abu Dhabi, has announced its latest Creative Reader competition, which will feature a new expanded format for its 2020-21 edition.
Launched in Abu Dhabi in 2013 to motivate young people in the emirate to embrace reading and a love learning, the competition has been through seven editions, experiencing substantial year-on-year growth that has been consistent with increased student participation.
For its eighth edition, however, Creative Reader is broadening its horizons and expanding its reach by opening up the competition to everyone in the UAE for the first time.
Organised in collaboration with the Abu Dhabi Education Council, the Creative Reader competition encourages students to read continuously and promotes the use of public libraries, in addition to highlighting the importance of the Arabic language as an intellectual and cultural tool.
As the aim is to stimulate a love of reading within young people, the competition has its primary focus on children's literature.
"One of MAKTABA’s main goals has always been to help nurture creativity, whether cultural or literary, by instilling and nurturing a deep love for reading, and now, with this eighth edition, we are opening up this wonderful and inspiring competition to the UAE as a whole, with the aim of including the entire GCC in the following one," said Abdullah Majed Al Ali, Director of Dar Al Kutub Sector and Executive Director of the Arabic Language Centre.
He added, "Our country is a passionate advocate of reading and has a deserved reputation for investing in its youth, helping them to achieve great things and become the leaders of tomorrow; education is key to our continued growth and success, and reading is a cornerstone of learning, one that can be a lot of fun."
There are three stages to the competition. First, the theme of the competition is announced and forms distributed to school students, with two months allocated to read as many books as possible.
The second stage is when contestants are contacted for personal interviews conducted by MAKTABA, during which fluency, comprehension and speed of reading are evaluated. The third and final stage is when the competition winners are announced during a special ceremony.