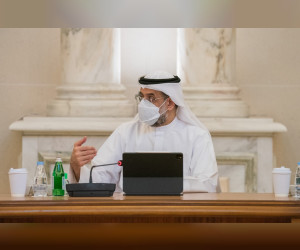 SHARJAH, 17th November, 2020 (WAM) — The Sharjah Executive Council, SEC, issued Decision No. 34 of 2020 amending Executive Council Resolution No. 18 of 2017 regarding the establishment and organisation of parenting councils for male and female students in the Emirate of Sharjah.
This came during its meeting, Tuesday, under the chairmanship of H.H. Sheikh Sultan bin Mohammed bin Sultan Al Qasimi, Sharjah Crown Prince, Deputy Ruler, and Chairman of the SEC, at the Sharjah Ruler’s office, in the presence of H.H. Sheikh Abdullah bin Salem bin Sultan Al Qasimi, Deputy Ruler of Sharjah and Deputy Chairman of the Council.
The Council reviewed several issues on its agenda concerning the Emirate's various affairs. It issued several resolutions that would support the development work of the Sharjah government at all levels and sectors.
The pre-approved housing annexe designs project submitted by the Sharjah Directorate of Housing, which comes in line with the Sakan initiative that provides pre-approved housing designs, and the Isnad initiative, aiming to the save design cost, time and effort on the beneficiaries, meet their needs and prevent construction violations, was reviewed.
The Housing Directorate was commended for providing the best services and facilities to the beneficiaries, directing in coordination with the concerned authorities to support pre-approved designs.
The Council reviewed the visual presentation submitted by the Department of Municipalities and Agriculture Affairs on green concrete and its uses in the Emirate of Sharjah. The presentation included the most important concepts and advantages of green concrete, including reducing 80 percent of carbon dioxide emissions rates, and improving concrete's resistance to fires and salts. It saves 30 percent of the energy consumed for the production process, improves the degree of thermal insulation, increases the life of concrete structures, and other advantages.
The presentation also included the results of applying green concrete in the housing support projects of the Directorate of Housing, in addition to proposals to develop and expand the scope of green concrete in the emirate, and directed the Council to study the positive impact on various sectors, evaluate them and develop appropriate implementation stages.
The Council approved the Memorandum of Understanding to be signed between the Sharjah Commerce and Tourism Development Authority and the Roads and Transport Authority in Dubai, aiming to spread awareness of the services provided by the two parties in general, and the maritime transport line between Sharjah and Dubai, by using the marine transport means of the Roads and Transport Authority in Dubai in particular.
It also approved the legislative authorisation memorandum submitted by the Real Estate Registration Department regarding the regulation of mortgages in the Emirate of Sharjah in line with the great developments in the real estate sector, supporting and strengthening the legal procedures.
The Council issued Resolution No. 34 of 2020 amending Executive Council Resolution No. 18 of 2017 regarding the establishment and organisation of parenting councils for male and female students in the Emirate of Sharjah.
The decision stipulated that the texts of Articles 5 and 6 of Executive Council Resolution No. (18) of 2017 referred to shall be replaced by the following texts: 1 – The councils in each city are formed with 10 members, half of whom are appointed through an election and the other half are appointed by the Sharjah Education Council, including 60 percent of Emiratis.
2 – The following shall be issued by a decision of the Chairman of the Sharjah Education Council: 1 – The regulations governing the council members’ elections in the emirate.
2 – Nominating the elected and appointed members of councils and identifying the chairperson of each council from among its members.
The following conditions are required for members of the councils: 1 – He shall not be less than 25 years old.
2 – He must be competent, well-mannered, and of good reputation. He has never been convicted of any crime.
5 – He should be a member of the parents ’councils at the school level or one of the educators working in educational institutions.
2 – The Sharjah Education Council may appoint two members of the community figures in each of the councils.