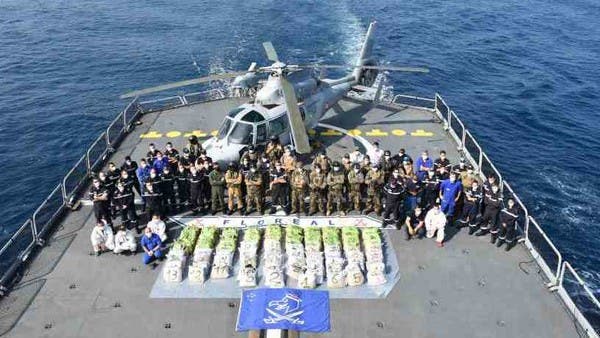 The Combined Maritime Forces (CMF), led by the Royal Saudi Naval Force, seized on November 8 over one tonne of hashish worth $8 million, the task force said on Monday.

“Sailors on board French Ship Floréal, the lead Floréal-class frigate, captured the drugs from a suspicious vessel during a counter-narcotics operation in the Arabian Sea’s infamous ‘Hash Highway’,” the CMF’s Combined Task Force 150 (CTF 150) said.

“With two successful drugs seizures in a matter of weeks, we are proving that we are a formidable force against drug smugglers, keeping millions of dollars of illegal substances off the streets,” he added.

A team of French sailors boarded the suspicious vessel, which was sailing along a route “known for transiting drugs.”

“Sometimes this involves assisting those in distress, and other times it targets those who seek to use the maritime environment to conduct illegal activities such as terrorism, smuggling and piracy,” he added.

“The Combined Maritime Forces (CMF) is a multinational maritime partnership which exists to counter illicit non-state actors on the high seas, promoting security, stability and prosperity in the Arabian Gulf, Red Sea, Gulf of Aden, Indian Ocean and Gulf of Oman. CTF 150 operates to disrupt and deny criminal and terrorist organizations operating outside of the Arabian Gulf, to ensure that legitimate commercial shipping can transit the region, free from non-state threats,” according to the statement.