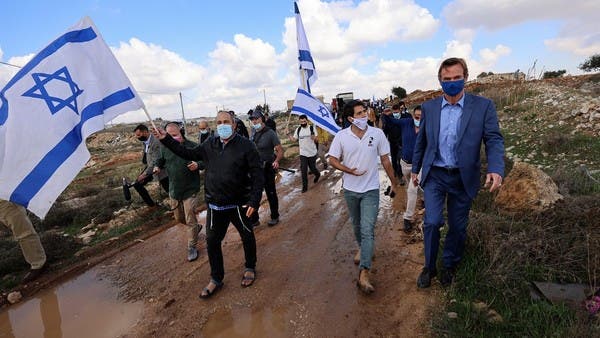 EU diplomats were taunted by right-wing Israeli protesters on Monday during a visit to a sensitive east Jerusalem area where the Israeli government plans to build a new settler neighborhood.

Several European Union envoys who had travelled to Givat Hamatos in Israeli-annexed east Jerusalem to protest the planned construction of new Jewish settler homes were called “anti-Semites” by shouting protesters.

“EU shame on you,” protesters shouted as diplomats tried to speak.

EU representative in the Palestinian Territories Sven Kuhn von Burgsdorff said the aim of the visit was to “demonstrate our disagreement” with the Israeli plans.

Watchdogs have warned that Israel was stepping up efforts to expand settlements before US President Donald Trump leaves office.

The Trump administration has broken with decades of bipartisan US practice by not opposing Jewish settlement activity in Israeli-annexed east Jerusalem and the occupied West Bank.

President-elect Joe Biden has said his administration will restore US opposition to the settlements which are considered illegal under international law and that many governments view as an obstacle to peace.

Von Burgsdorff said “the four years of Mr. Trump have severely compromised the possibility of reaching a two-state solution.”

“Our hope is that with the US President-Elect taking up office… this very important process can be revitalized,” he added.

The Palestinians claim east Jerusalem as the capital of their future state.

Most of the international community believes Jewish settlement expansion in east Jerusalem threatens the peace process by cutting the city off from Bethlehem, thereby disrupting the continuity of the Palestinian territories.

Palestinian prime minister Mohammad Shtayyeh on Monday condemned an “escalating and intensive assault plan for the next 10 weeks in a race against time to create a new fait accompli before Donald Trump leaves the White House.”

UN Middle East envoy Nickolay Mladenov called on Israel to “reverse” its plans in Givat Hamatos, saying the project would

“significantly damage prospects for a future contiguous Palestinian State and for achieving a negotiated two-state solution.”

Israel took control of east Jerusalem during the 1967 Six Day War, before annexing it in a move not recognized by most of the international community.