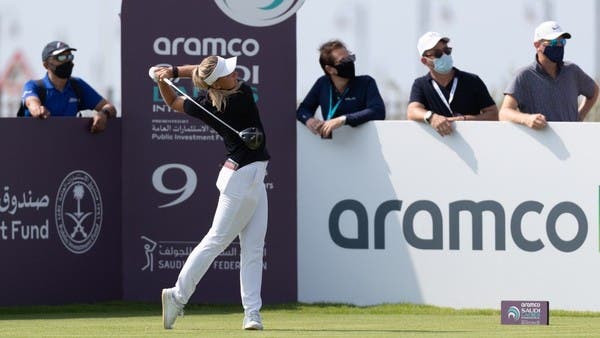 A ‘new face’ of Saudi Arabia has been revealed through the Kingdom’s first ever professional women’s golf event, held days before the country is set to host the G20 summit.

As the first Arab woman to play professionally on the Ladies European Tour, Haddioui said the event is a “new page” for both women and women’s golf in Saudi Arabia.

“Saudi is opening to the world, opening to women,” said Haddioui during a press conference ahead of the event, adding that she was “very surprised” when she first visited Saudi Arabia.

“You hear a lot of things and think it’s more conservative than it really is…I think it’s about time the world sees this new face of Saudi,” she added.

The event, sponsored by Saudi Aramco, spotlights the female face of a traditionally male-dominated sport and intends to encourage women in the Kingdom to try golf – and overcome gender bias.

“For Saudi women to see themselves the outstanding Ladies European Tour golfers in action, we believe it will open up the sport to women in Saudi Arabia,” said Aramco senior vice president of human resources and corporate service Nabeel Jama in an interview with Al Arabiya English.

Read more: US policies in the Middle East: An in-depth analysis of Biden’s plans

“Beyond the obvious physical benefits of participating in golf, or any other sports, there are multiple benefits including building self-esteem, overcoming gender stereotypes, providing opportunities for leadership, and encouraging younger generations of women to become more competitive and motivated to achieve greatness,” said Jama.

In tandem with the event, the Kingdom launched a comprehensive national golf sustainability strategy that includes opening multiple new golf courses in Saudi Arabia and the establishment of the Ladies First Club, which will provide 1,000 complimentary golf course memberships to women in the Kingdom.

“We are showing our support and commitment to women’s inclusion in sports, in keeping with the Kingdom’s Vision 2030 to empower the Kingdom’s female population,” said Jama.

It includes the goal of increasing women’s labor force participation from 22 percent to 30 percent.

A World Bank report released this year found that Saudi Arabia’s economy had made the biggest progress globally toward gender equality since 2017.

In 2019, Saudi Arabia enacted “groundbreaking” reforms that allowed women greater economic opportunities, according to the World Bank’s “Women, Business and the Law 2020” study.

Now, 2020 is shaping up to be the year of landmark female sports participation in Saudi Arabia, from the Ladies International Golf Tournament to the Kingdom’s Dakar Rally, which featured an all-female team.

Bahrain’s FM to meet with Netanyahu, Pompeo in Israel