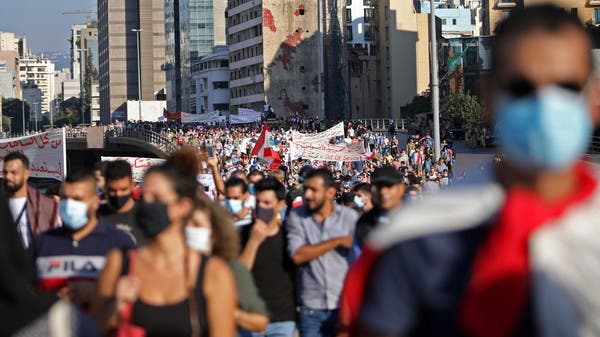 Independent student bodies secured a landslide victory at the American University of Beirut on Friday, in unprecedented success against blocs aligned with traditional political parties.

Student elections at AUB saw two independent lists win 65 seats out of 82 in the student council and 15 out of the 19 spots on the university’s Committee for Professors and Students.

Read More: One year since the October 17 movement in Lebanon, what has changed?

Leen El Harake, an activist student and co-manager of the independent campaign at LAU, said that leading the first student election after the nationwide anti-government protests, ensuing economic crisis and, most recently, the Aug. 4 Port of Beirut blast was both a challenge and a responsibility.

“It was a responsibility because everyone in the country was desperately waiting for change. We had to make sure that we lived up to people’s hopes because we knew it would impact student voters in other universities,” she told Al Arabiya English.

“After our elections, we started seeing a ripple effect, and we couldn’t be happier. From RHU to AUB and soon in [other Lebanese universities], independent councils are unstoppable today,” she added.

For Siba Mroueh, the VP of Communications and Political Identity at Change Starts Here, the student elections are always important because the university is “a microcosm of the Lebanese society.”

She told Al Arabiya English that the student elections were “parallel” to all the political work done since the October 17 uprising. “The students who are voting now in these elections are the people who will vote later in parliamentary elections,” she said.

Independent candidate Oussama Obeid said the win was not only about securing seats in university elections, but it was about showing people that there was hope for change.

“The Secular Club’s discourse accumulated over the past few years after being involved in a set of political activities, including the 2015 anti-establishment protests during the garbage crisis, the 2016 Beirut Municipality elections, and the 2019 October uprising,” said Karim Safieddine, former president of the AUB Secular Club.

Meanwhile, Hussein El-Achi from Minteshreen, a new youth-led political party that supported both campaigns at AUB, said student elections had always been crucial in Lebanon to determine shifts in public opinion among the youth.

He said this explains why traditional political parties expend significant resources and efforts during student elections to show that public opinion still supports each one of those parties.

“This year, the elections had greater importance because they follow one of the most [significant] modern Lebanese history events: the October 17 uprising,” he told Al Arabiya English.

“It is important to note that many traditional political parties avoided those electoral battles,” he said, explaining that the reason for this was an expected victory for independents.

One year since the October 17 movement in Lebanon, what has changed?

In Lebanon, Gebran Bassil’s day of reckoning has come as sanctions hit