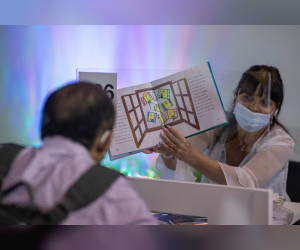 SHARJAH, 14th November 2020 (WAM) – The Sharjah Book Authority, SBA, has announced receiving applications from 1,014 publishers for the Sharjah International Book Fair, SIBF, Translation Grant which annually funds the translation of books by publishers participating in the annual Professional Programme, which runs prior to the start of SIBF in November each year.
SBA has also announced that registrations to apply for the fund will remain open until February 2021.
The SIBF Translation Grant was launched under the directives of H.H. Dr. Sheikh Sultan bin Muhammad Al Qasimi, Supreme Council Member and Ruler of Sharjah, at the opening ceremony of the 30th edition of SIBF to encourage the translation movement in the Arab region and the world through cash grants awarded to publishers to translate their publications into other languages. Valued at between US$1,500 – $4,000, each grant helps a publisher cover the translation costs, partially or fully.
This year, SBA has received applications to translate Arabic books into 15 international languages. These include translating 48 Arabic books into Turkish, 39 into English, 32 into Portuguese, 26 into Armenian, 19 into Macedonian, 12 into Serbian, nine into Georgian, eight each into Ukrainian and Malayalam, seven each into Nepali and French, five into Russian, three each into Spanish and Urdu, and one into Estonian.
The grant also received applications to translate books from 16 diverse languages into Arabic, including 281 from Turkish, 226 from English, 54 from Spanish, 41 from Georgian, 40 from Italian, 34 from Russian, 24 from Serbian, 18 from Portuguese, 16 from Albanian, 15 from Armenian, 13 from Macedonian, 12 from Ukrainian, six from French, three from Urdu, two from Nepali, and one from Romanian.
Ahmed bin Rakkad Al Ameri, Chairman of SBA, stressed that the SIBF Translation Grant exemplifies the vision of H.H. Sheikh Dr. Sultan bin Muhammad Al Qasimi, Member of the Supreme Council and Ruler of Sharjah, to support and leverage the realities of the translation movement from Arabic into other languages and vice versa.
Al Ameri remarked that the high number of applications received so far is in line with the objectives of the fund, as it attests to the interest of both writers and publishers in seeing their Arabic works translated into other languages.
Al Ameri added: "Translation plays a vital role in promoting cultures worldwide and gives readers access to books of creative writers and authors. It also furthers cross-cultural communication and steers efforts in providing readers worldwide access to the Arabic literary and cultural output."