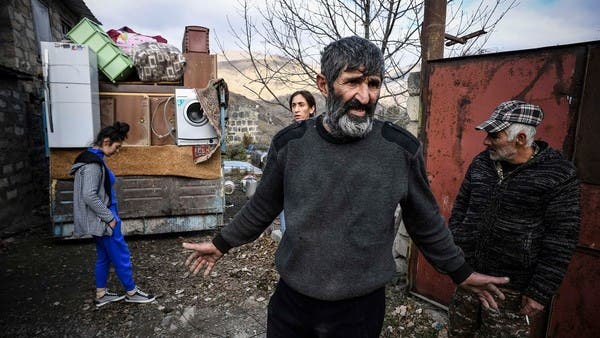 Villagers in Nagorno-Karabakh set their houses on fire Saturday before fleeing to Armenia ahead of a weekend deadline that will see parts of the territory handed over to Azerbaijan as part of a peace agreement.

Residents of the Kalbajar district in Azerbaijan that was controlled by Armenian separatists for decades began a mass exodus this week after it was announced Azerbaijan would regain control on Sunday.

Fighting between the separatists backed by Armenian troops and the Azerbaijan army erupted in late September and raged for six weeks, leaving more than 1,400 dead and forcing thousands to flee their homes.

In the village of Charektar, on the border with the neighboring district of Martakert which is to remain under Armenian control, at least six houses were on fire Saturday morning with thick plumes of gray smoke rising over the valley, an AFP journalist saw.

“This is my house, I can’t leave it to the Turks,” as Azerbaijanis are often called by Armenians, said one resident as he threw burning wooden planks and rags soaked in gasoline into a completely empty house.

“Everybody is going to burn down their house today… We were given until midnight to leave,” he said.

On Friday at least 10 houses were burned in and around Charektar.

The ex-Soviet rivals agreed to end hostilities earlier this week after previous efforts by Russia, France and the United States to get a ceasefire fell through.

A key part of the peace deal includes Armenia’s return of Kalbajar, as well as the Aghdam district by November 20 and the Lachin district by December 1, which have been held by Armenians since a devastating war in the 1990s.

Russian peacekeepers began deploying to Nagorno-Karabakh on Wednesday as part of the terms of the accord and took control of a key transport artery connecting Armenia to the disputed province.

Russian military officials said the mission consisting of nearly 2,000 troops would put in place 16 observation posts in mountainous Nagorno-Karabakh and along the Lachin corridor.