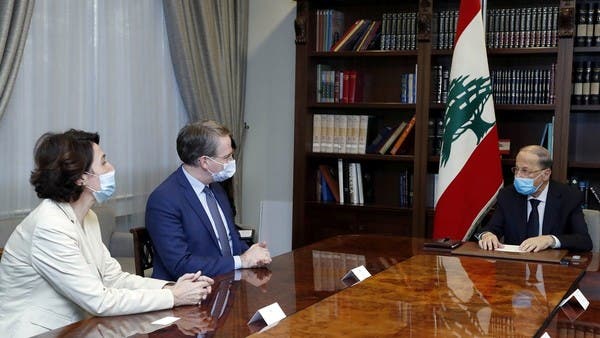 An adviser to French President Emmanuel Macron met top Lebanese officials on Thursday in a desperate bid to save a plan Paris put forward to rescue the country’s agonizing economy.

Patrick Durel, who arrived in Beirut on Wednesday, held talks with President Michel Aoun and other key players, including parliament speaker Nabih Berri.

A statement from the presidency quoted Aoun as saying that he “adheres to the French initiative, which is in the interest of the country.”

Yet Lebanon’s ruling class has ignored the deadlines set by France, which has spearheaded efforts to stop the country’s collapse since a crushing currency crisis and a cataclysmic explosion at Beirut port.

On September 27, Macron gave another deadline of “four to six weeks” which also went unheeded.

French officials have voiced their exasperation with Lebanese politicians’ unwillingness to put the interest of the country before their own.

After Lebanon’s ambassador to Germany was designated to form a government and failed, Aoun last month asked Saad Hariri to return and attempt to forge a consensus on a cabinet line-up.

Hariri, who has held the position twice, was forced to resign last year, under pressure from an unprecedented popular protest movement.

Hariri, Aoun, Berri and others embody the sectarian-driven, corrupt and hereditary brand of politics that protesters, and ostensibly France, say needs to be done away with.

Lebanon, which defaulted on its debt this year, is experiencing its worst ever economic crisis and is still reeling from a devastating explosion at the port that gutted entire neighborhoods of Beirut on August 4.

Both are widely blamed on government corruption and incompetence.