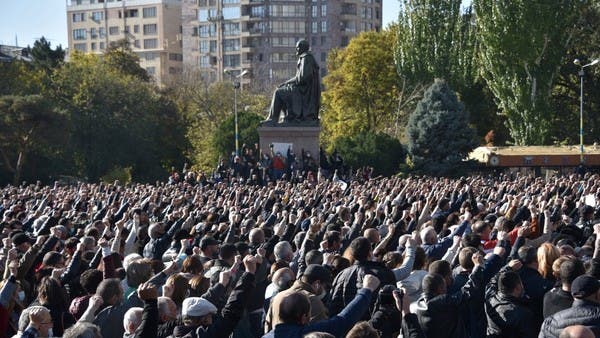 Thousands of Armenian demonstrators, chanting “Nikol is a traitor”, demanded Prime Minister Nikol Pashinyan resign on Wednesday over a ceasefire that secured territorial advances for Azerbaijan in Nagorno-Karabakh after six weeks of fighting.

The ceasefire, announced on Tuesday, ended the worst fighting in the region in decades, and has been celebrated as a victory in Azerbaijan. Pashinyan has called it a disaster but said he had no choice but to sign it to stave off a defeat.

Several thousand people defied a martial law ban on street rallies to protest in the capital Yerevan, a day after protesters stormed and ransacked some government buildings.

Wednesday’s protesters, some wearing protective masks, gathered despite the arrest of a prominent opposition leader and several others at the start of the rally, and regardless of the coronavirus pandemic that has hit Armenia hard.

The ceasefire halted military action in and around Nagorno-Karabakh, an enclave internationally recognized as part of Azerbaijan but populated by ethnic Armenians. Under the agreement, 2,000 Russian peacekeeping troops are being deployed to the region.

Since the early 1990s, ethnic Armenians had military control over all of Nagorno-Karabakh and substantial swaths of Azeri territory surrounding it. They have now lost much of the enclave itself as well as the surrounding territory.

Pashinyan said he concluded the peace deal under pressure from his army. Nagorno-Karabakh’s leader said there had been a risk of Azerbaijan taking control of the whole enclave following the fall of its second biggest city, Shushi, known by Azeris as Shusha.

“This is a big failure and disaster,” Pashinyan said on Tuesday. He said he was taking personal responsibility for the setbacks, but he rejected calls to step down.

He did not immediately respond to Wednesday’s protests.

Among those arrested were Gagik Tsarukyan, leader of the opposition Prosperous Armenia party, according to a Facebook post by Hripsime Arakelian, a member of his party. Prosperous Armenia is the second biggest faction in parliament.

The Russian peacekeepers – who are due to stay in the region for five years – started leaving Russia on Tuesday and are now controlling the Lachin corridor, a mountain pass linking Armenia and Nagorno-Karabakh, the Russian army said.

For Russia, which has a defense pact with Armenia and a military base there, securing the ceasefire deal sent a signal that it is still the main arbiter in the energy-producing South Caucasus, which it sees as its own backyard.

Turkey also flexed its muscles during the conflict, providing diplomatic support and arms supplies for Azerbaijan. It was not involved in mediating the ceasefire deal and has not contributed any peacekeepers.

Though Azerbaijan has hailed the ceasefire agreement as a victory, some Azeris are frustrated that Azeri forces stopped fighting before regaining control of all of Nagorno-Karabakh. Other Azeris are wary about the arrival of peacekeepers from Russia, which dominated the region in Soviet times.