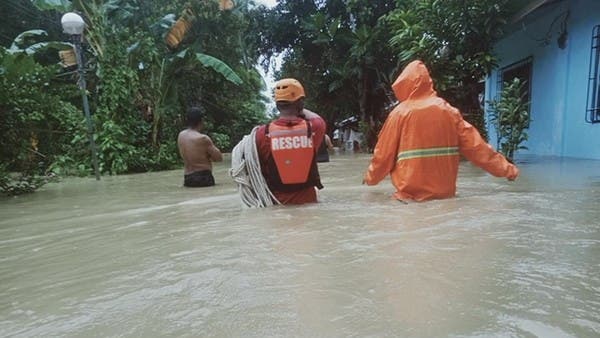 A typhoon blew closer on Wednesday to a northeastern Philippine region still struggling to recover from a powerful storm that left a trail of death and destruction just over a week ago, officials said, adding that thousands of villagers were being evacuated again to safety.

Typhoon Vamco gained strength with sustained winds of 135 kilometers (84 miles) per hour and gusts of up to 165 kph (102 mph) before it was forecast to slam ashore into the Polillo islands in Quezon province on Wednesday night or early on Thursday.

Quezon and outlying provinces have hardly recovered from the devastation wrought early this month by Typhoon Goni, which blew ashore with destructive super-typhoon force but considerably weakened before blowing out in the South China Sea. One of the strongest typhoons in the world this year, Goni left more than 30 people dead or missing and damaged or destroyed more than 270,000 houses and shanties, many along coastal villages, officials said.

“This typhoon will test once more our spirit, bruised but not broken,” military chief of staff Gen. Gilbert Gapay said of the approaching typhoon.

Navy, air force and army forces have remained on high alert from the last typhoon and again deployed disaster-response contingents in high-risk areas ahead of the onslaught, Gapay said in a statement.

More than 12,000 villagers were moved to evacuation centers on Wednesday and many more were being brought to safer ground, according to the Office of Civil Defense and other officials.

Tens of thousands of others remained displaced after losing their homes in Goni’s devastation, including in the hard-hit island province of Catanduanes, where Goni made landfall on Nov. 1 and damaged or destroyed tens of thousands of coastal shanties, houses and buildings, including emergency shelters, and knocked down power and communications.

In Guinobatan town in nearby Albay province, heavy rains generated by Goni washed down volcanic mud, debris and boulders in a torrent of mudflow that engulfed about 150 houses. The owners of those houses remain displaced and were warned about returning to the mudflow-inundated community as the new typhoon approached.

The government’s main disaster-response agency pleaded to the media to help authorities relay typhoon alerts in the Goni-devastated northeastern region, saying it could not send messages by cellphones due to damaged telecommunications systems.

With its wide band of rain clouds, Vamco may pass about 50 kilometers (31 miles) north of the capital, Manila, at dawn on Thursday if it doesn’t shift course, forecasters said.

Classes and government work were suspended in the capital and outlying regions Wednesday. Several international and domestic flights were canceled. Seaports were closed and ferry boats and cargo ships were prohibited from venturing out to sea near the typhoon’s path, stranding hundreds of commuters, officials said.

Authorities warned of storm surges of up to 2 meters (6 feet) in Manila and outlying coastal cities, and villagers along the coast and low-lying areas were advised to move to safer ground.

The Philippines is hit by about 20 typhoons and storms each year. It’s also located on the so-called Pacific “Ring of Fire,” where earthquakes and volcanic eruptions are common, making it one of the world’s most disaster-prone countries.