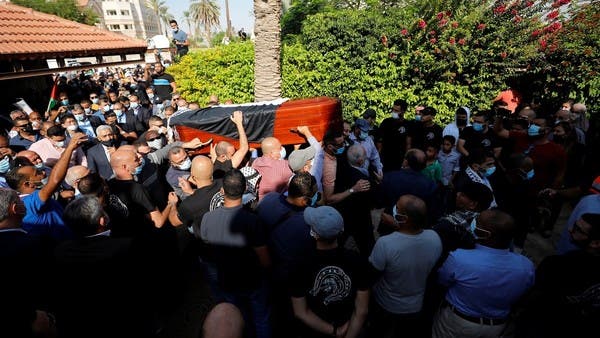 In a somber memorial ceremony in the occupied West Bank, a Palestinian military honor guard laid a wreath on Wednesday over the coffin of veteran Palestinian official Saeb Erekat, who died after contracting COVID-19.

Erekat, 65, served President Mahmoud Abbas and his predecessor Yasser Arafat as chief negotiator over decades of talks with Israel. His funeral, due to take place later on Wednesday, coincides with the 16th anniversary of Arafat’s death.

A procession of Palestinian soldiers wearing face masks carried a coffin containing Erekat’s body through a plaza at Abbas’ presidential compound in Ramallah.

Abbas and other senior officials watched as two soldiers laid a wreath over the coffin, which was draped in a Palestinian flag and a keffiyeh — the black-and-white checkered scarf that was often worn by Arafat.

A long-time resident of Jericho, the largest Palestinian city in the Jordan Valley, Erekat died on Tuesday after announcing on October 8 that he had contracted the coronavirus.

A lung transplant three years ago left his immune system compromised, and his condition deteriorated. He was taken to an Israeli hospital in Jerusalem three weeks ago and was pronounced dead on Tuesday after multiple organ failure.

Erekat, who held the post of secretary general of the Palestine Liberation Organization, was one of the most experienced and high-profile advocates for the Palestinian cause over decades of conflict with Israel.

He led the Palestinians in peace talks with Israel for many years until they collapsed in 2014 but remained a firm backer of the negotiated creation of a future Palestinian state.

In recent years he was the main face of Palestinian opposition to US President Donald Trump’s plan that envisaged leaving Israel in control of Jewish settlements and large parts of the occupied West Bank.

Abbas and other officials waved goodbye to Erekat’s funeral convoy as it departed the presidential compound and drove to Jericho, where his body will be carried in procession to a town mosque for prayers.

A military ceremony is then expected to lead the procession to a nearby cemetery.

The somber events take place as Palestinians mark the death of Arafat, who died in Paris on November 11, 2004, and was flown back to Ramallah for burial, with a huge crowd in attendance.