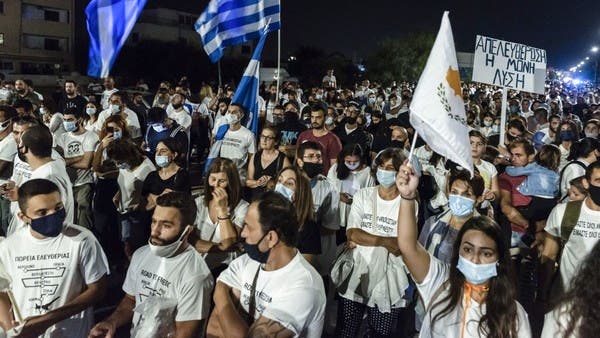 Hundreds of people in Northern Cyprus protested Tuesday against “interference” by Ankara, days before Turkish President Recep Tayyip Erdogan is to visit a controversially reopened beach resort for a picnic.

“No interference,” “Freedom for all,” and “In Cyprus, the Cypriots have their say,” chanted the demonstrators, who included opposition leaders, an AFP correspondent reported.

“We are telling Turkey: you can’t run Northern Cyprus from Ankara,” said Gulsen Ercin, a spokeswoman for an organization that called for the demonstration in northern Nicosia, the island’s divided capital.

Cyprus has been split since 1974, when Turkey occupied the northern third of the eastern Mediterranean island in response to a coup intended to annex Cyprus to Greece.

The self-proclaimed Turkish Republic of Northern Cyprus (TRNC) hosts around 30,000 Turkish troops and its statehood, unilaterally declared in 1983, is only recognized by Turkey.

Erdogan said last month he would visit Varosha, the beach resort that had been sealed off since the Turkish invasion that saw Greek Cypriot inhabitants flee in 1974.

“We can have a picnic at Varosha,” Erdogan told a news conference in Ankara.

“We see it on screen, now we want to see it for ourselves,” the Turkish president added.

The reopening of the ghost town on the eve of the north’s October 18 election infuriated the Republic of Cyprus, which controls the south of the island and is internationally recognized.

Tuesday’s demonstration reflects the anger that arose among many people in Northern Cyprus during campaigning for the election, when Erdogan’s government openly supported the nationalist Tatar.

“No picnic at the expense of others,” the protesters chanted, referring to Erdogan’s planned visit to the TRNC on Sunday.