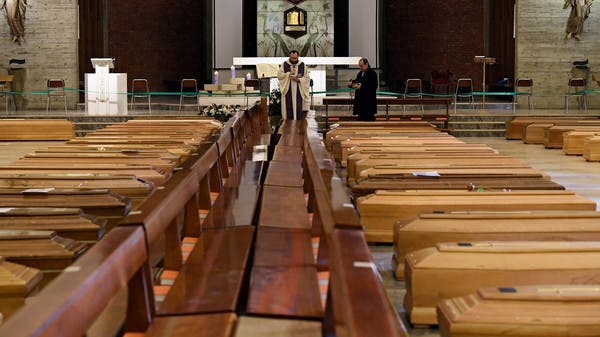 More than 300,000 people have died of COVID-19 across Europe, according to a Reuters tally on Tuesday, and authorities fear that fatalities and infections will continue to rise as the region heads into winter despite hopes for a new vaccine.

With just 10 percent of the world’s population, Europe accounts for almost a quarter of the 1.2 million deaths globally, and even its well-equipped hospitals are feeling the strain.

After achieving a measure of control over the pandemic with broad lockdowns earlier this year, case numbers have surged since the summer and governments have ordered a second series of restrictions to limit social contacts.

In all, Europe has reported some 12.8 million cases and about 300,114 deaths. Over the past week, it has seen 280,000 cases a day, up 10 percent from the week earlier, representing just over half of all new infections reported globally.

Hopes have been raised by Pfizer Inc’s announcement of a potentially effective new vaccine, but it is not expected to be generally available before 2021 and health systems will have to cope with the winter months unaided.

Britain, which has imposed a fresh lockdown in England, has the highest death toll in Europe at around 49,000, and health experts have warned that with a current average of more than 20,000 cases daily, the country will exceed its “worst case” scenario of 80,000 deaths.

France, Spain, Italy and Russia have also reported hundreds of deaths a day and together, the five countries account for almost three quarters of the total fatalities.

Already facing the prospect of a wave of job losses and business failures, governments across the region have been forced to order control measures including local curfews, closing non-essential shops and restricting movement.

France, the worst-affected country in the EU, has registered more than 48,700 infections per day over the past week and the Paris region’s health authority said last week that 92 percent of its ICU capacity was occupied.

Facing similar pressures, Belgian and Dutch hospitals have been forced to send some severely ill patients to Germany.

In Italy, which became a global symbol of the crisis when army trucks were used to transport the dead during the early months of the pandemic, daily average new cases are at a peak at more than 32,500. Deaths have been rising by more than 320 per day over the past three weeks.

While the new vaccine being developed by Pfizer and German partner BioNTech will take time to arrive, authorities are hoping that once winter is passed, it will stem further outbreaks next year.

“More than any fiscal spending package or central bank lending program, a healthcare solution to COVID has the greatest potential to restore economic activity to its full potential…” it said in a note.

Yet health experts cautioned that the vaccine, should it be approved, was no silver bullet – not least because the genetic material it’s made from needs to be stored at temperatures of minus 70 degrees Celsius (-94 F) or below.

Such requirements pose a challenge for countries in Asia, as well as Africa and Latin America, where intense heat is often compounded by poor infrastructure.