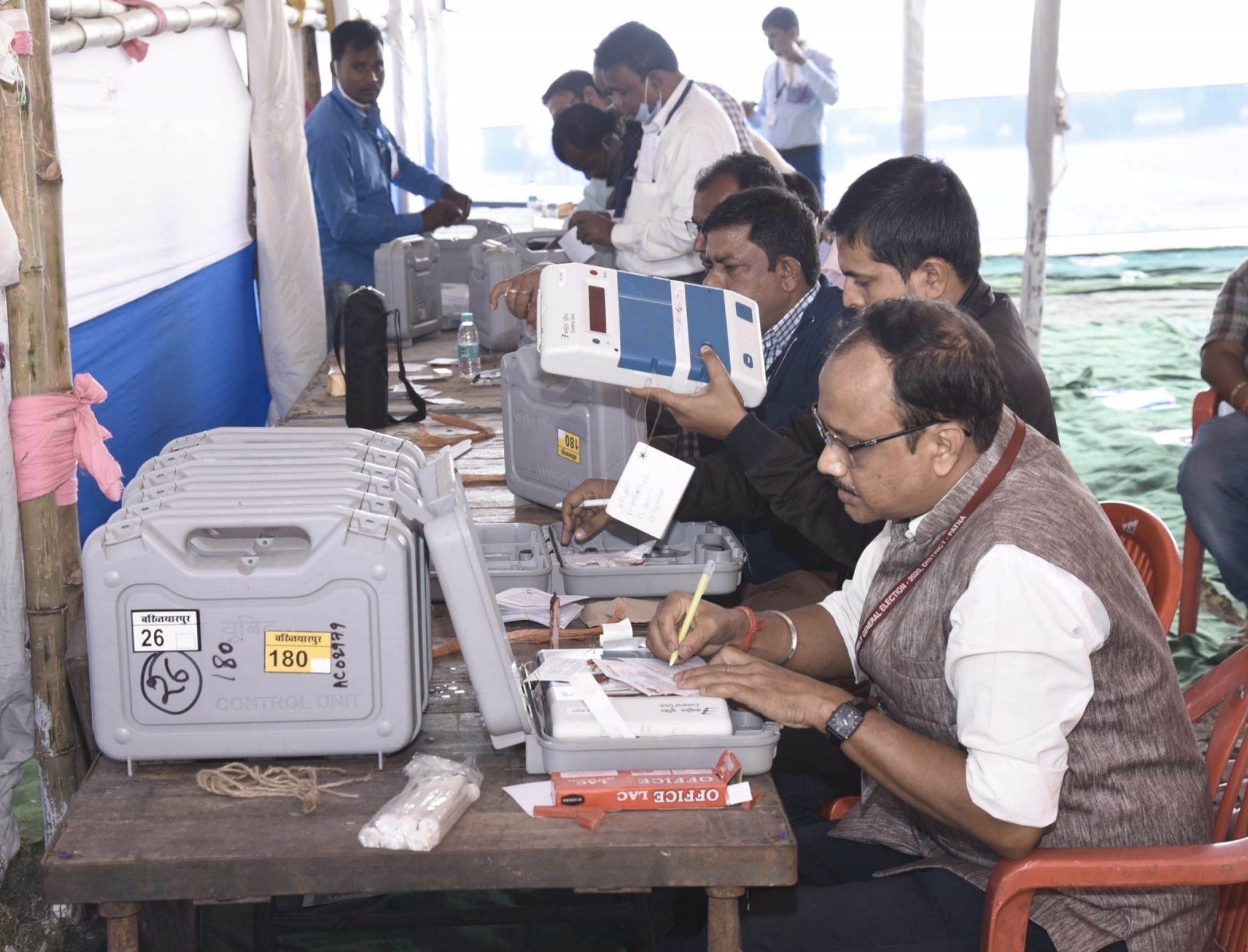 Counting of votes got underway on Tuesday morning for the three-phase Bihar Assembly elections that may herald a new era in state politics, with exit polls predicting a victory for the RJD-led Grand Alliance.

The magic number for the winner is 122 in the 243-seat Assembly. The Janata Dal United-led National Democratic Alliance and the Rashtriya Janata Dal-led United Progressive Alliance are the main contenders.

As the trends are coming in from polling centres, the BJP is emerging as the single-largest party in the state but the Congress is not able to repeat its 2015 performance of 27 seats and the Mahagathbandhan is behind the NDA.

Congress leaders say while it’s early to comment on the outcome of counting trends but the BJP is more comfortable on seats fought by the Congress. Also, the RJD despite being popular, could not get the popular votes as per trends till noon.

Congress leaders feel that though the party contested on 70 seats but they were tough contests as on these seats the BJP had a strong presence. The RJD conceded those seats which were either urban seats or were strong BJP bastions.

As per trends, at noon the BJP is emerging as the single-largest party with 73 seats. While the RJD is leading at 57 seats, the JDU at 51 and the Congress at 21 seats.

Bihar voted for the 243-member Assembly in three phases — October 28, November 3 and November 7.

The Bihar election is being seen as a referendum on Chief Minister Nitish Kumar, whose JD(U) is in alliance with the BJP-led NDA. Nitish Kumar has governed Bihar three times in a row since 2005.

Rashtriya Janata Dal (RJD) leader and Mahagathbandhan’s chief ministerial candidate Tejashwi Yadav is leading from the Raghopur Assembly seat, as per the Election Commission on Tuesday.

As per the data from the ECI, Yadav is leading by a margin of 1,554 votes against Bharatiya Janata Party’s (BJP) Satish Kumar.

As per the trends from the ECI on 11:30 am, out of 242 from the total 243 seats, the BJP is leading on 70 seats, while its National Democratic Alliance (NDA) ally Janata Dal United is leading on 48 seats. Meanwhile, among the Mahagathbandhan members, RJD is leading on 62 seats, while Congress is leading on 20 and the Left parties, three combinedly, are ahead on 19 seats.

The Vikassheel Insaan Party (VIP) is ahead on seven seats while Hindustani Awam Morcha (HAM) are leading on one seat. The Lok Janshakti Party (LJP), which went solo for the 2020 Assembly polls, is leading on five seats in Bihar.

Mahagathbandhan was ahead on 95 seats – RJD 61, Congress 19, Left 15 BSP and All India Majlis-e-Ittehad-ul-Muslimeen (AIMIM) have a lead on one seat each, LJP on four and independents on five.

Luv Sinha is pitted against three-time BJP MLA Nitin Nabin, who has been winning the seat since 2005.

Earlier, Nabin expressed confidence about his prospects of winning the seat again.

According to the early poll trends, Tejashwi was leading from the Raghopur Assembly seat with 2,445 votes, while his rival Satish Kumar was trailing by over 500 votes with 1,990 votes.

Meanwhile, Tej Pratap, who shifted his Assembly seat from Mahua to Hasanpur, is trailing behind the ruling Janata Dal(United) candidate Raj Kumar Ray by over 1,500 votes.

Key rivals for the Bihar Assembly, Rashtriya Janata Dal (RJD) and Bharatiya Janata Party (BJP) are neck and neck after two hours of counting for the 243-seat-Vidhan Sabha.

As per results announced by the Election Commission so far, the RJD is leading on 46 out of 152 seats counted till 10 a.m., while the ruling BJP is trailing by securing lead on 40 seats.

The results are mostly from counting of the postal ballots and EVMs simultaneously at 1,06,515 polling stations across the state.

NDA leading on 97 seats, Mahagathbandhan ahead on 82 seats

While Mahagathbandhan is ahead on 82 seats – RJD 54, Congress 14, Left 14 BSP has a lead on one seat, LJP on four, while AIMIM is ahead on 2 and independents on three.

BSP and AIMIM have a lead on one seat each, LJP on four & independents on five #BiharElectionResults pic.twitter.com/VthzTivoM7

Mahagathbandhan was ahead on 46 seats – RJD 29, Congress 12, Left 5. BSP has a lead on two seats, Lok Jan Shakti Party on three while AIMIM is ahead on one

While Mahagathbandhan was ahead on 34 seats – RJD 17, Congress 12, Left 5. Bahujan Samaj Party has a lead on two seats, Lok Jan Shakti Party on one.

Counting of votes polled in Bihar Assembly elections began at 8 am on Tuesday at 55 counting centres across 38 districts of the state.

Mahagathbandhan constitutes RJD (144 seats) and the Congress with 70 seats. Other alliance partners include the CPI-ML (19 seats), CPI (6 seats), and the CPIM (4 seats).

Incumbent Chief Minister Nitish Kumar was the face of the NDA while Mahagathbandhan declared Tejashwi Yadav as its chief minister candidate.

Gujarat by-polls: BJP leading in 7 out of 8 assembly seats

Bharatiya Janata Party (BJP) is leading on seven of the eight Assembly seats which went to by-polls in Gujarat, as per latest trends of Election Commission of India.

According to the commission, BJP has recorded 53.13 per cent vote share till 10:30 am on Tuesday, while the Indian National Congress vote share stands at 35.1 per cent.

The by-elections for eight assembly seats in Gujarat were conducted by the poll panel on November 3 and counting of votes began at 8 am today.

The by-elections were held after the sitting Congress MLAs resigned ahead of the Rajya Sabha polls held in June this year. Five of them later joined the BJP and are contesting the by-polls on the party’s ticket.

The Bharatiya Janata Party (BJP) has secured a victory in the Singhat Assembly constituency (Manipur), out of a total of five seats, in which by-polls were held, according to the Election Commission of India (ECI).

According to the data from the ECI, BJP candidate Ginsuanhau has been declared the winner from Singhat, while Oinam Lukhoi Singh is leading by a margin of 268 votes from the Wangoi seat against National People’s Party (NPP) candidate, Khuraijam Loken Singh.

Meanwhile, Congress’ Moirangthem Hemanta Singh is leading by a margin of 675 votes against BJP’s Paonam Brojen Singh on the Wangjing Tentha seat.

By-polls were held in five Assembly constituencies, including Lilong, Wangjing Tentha and Saitu, in the state on November 7.