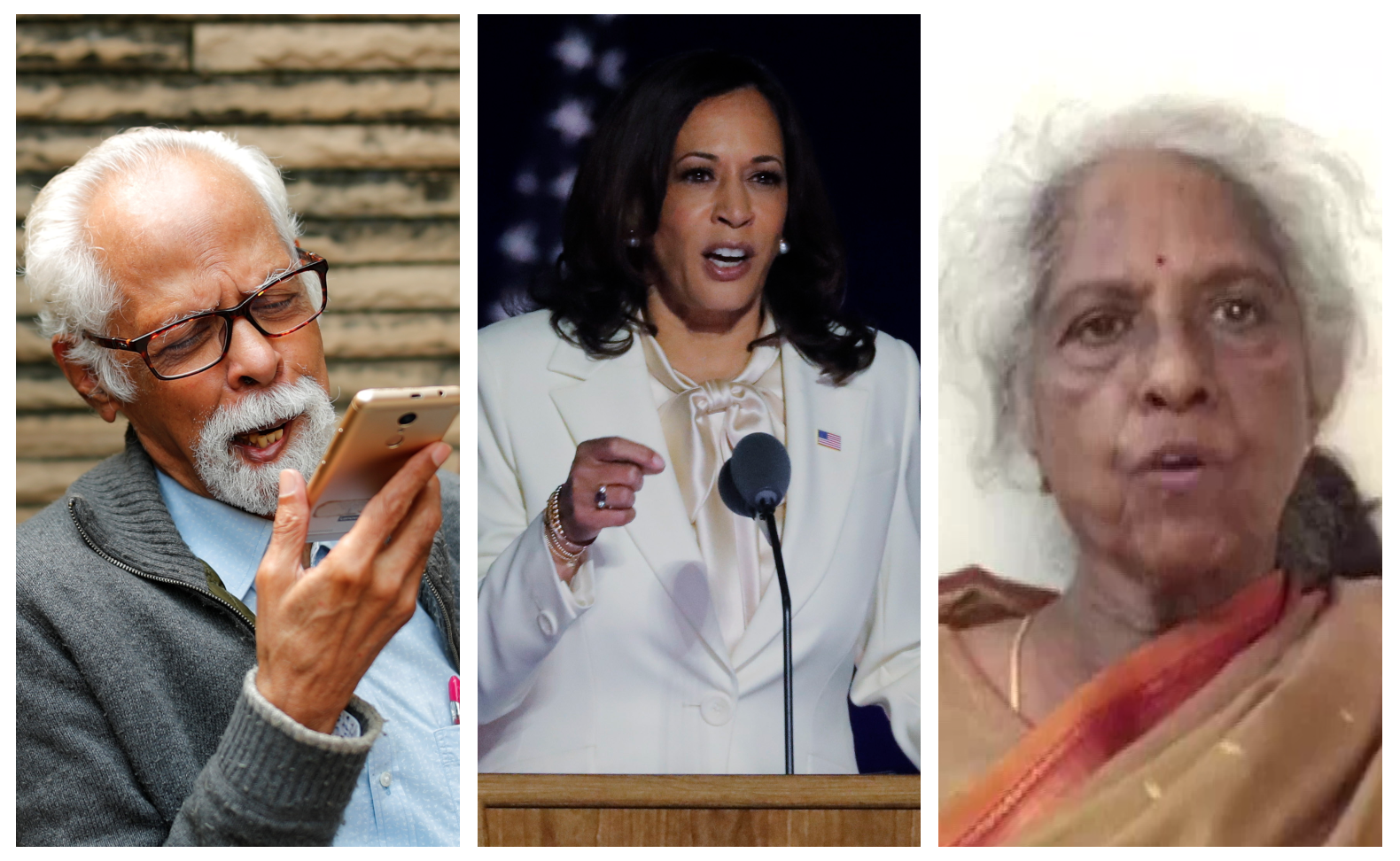 The vice president-elect has always been at home whenever she’s in India with her family.

Vanakkam America (Hello, America), said the lines on one of the rangolis in front of a home in Thulasendrapuram, the ancestral village of Kamala Harris, in the southern Indian state of Tamil Nadu.

Media reports on the festivities – some of them called it an “early Diwali” – said residents of the village burst crackers, distributed sweets and spoke with television crews in celebration of the US vice president-elect, who was described in the rangoli as “the pride” of the village. Harris’ maternal grandfather, PV Gopalan, was born in the village, located about 380km from Chennai.

As members of Harris’ family in India prepare for their US trip to attend the presidential inauguration, scheduled on January 20, 2021, her Chennai-based aunt – Dr Sarala Gopalan – is also planning a visit to the family temple in the village. Dr Sarala, an obstetrician, is the younger sister of Dr Shyamala Gopalan, Harris’ mother who passed away in 2009.

We have always seen her (Kamala Harris) grow up as a good child. She was very good at whatever she did & she has achieved what she wanted to do: Dr Sarala Gopalan, maternal aunty of US Vice President-elect Kamala Harris, in Chennai (8.11) pic.twitter.com/Y1aoqVo7To

In August, while accepting the Democratic nomination for vice president, the 56-year-old Harris had spoken about her “chithis” (Tamil for mothers’ younger sisters), setting off frenetic social media conversations about the word and the pride she expressed on her Indian heritage. Is the family-first trait something that her aunts also see as something innately Indian?

Harris, daughter of immigrant parents Dr Shyamala, a cancer researcher, and Jamaica-born economics professor Donald J. Harris, said in her first address as vice president-elect that her mother believed “so deeply” in an America where “a moment like this was possible”. During the address, she also paid tributes to black, Asian, white, Latina and native American women “who fought and sacrificed so much for equality and liberty and justice for all”.

Gopalan Balachandran, Harris’ maternal uncle who lives in New Delhi, said her victory – Harris is the first woman to be elected as vice president of the US – was historic for what it represents to women in the US. He, however, said it was difficult to fathom the “Indian-ness” that appears as a recurring theme in media reports about her.

“It’s a rather vague expression; I can’t say what Indian-ness is or what I see as strikingly Indian in her. What I can say is that she’s never a tourist when she’s with us. When she’s with family, she’s comfortable; she’s at home,” he told Khaleej Times. Balachandran is coordinating with other members of the family on the trip to the US. “God willing, we’ll all be there,” he said.

Harris has cited her mother and maternal grandfather, who was a civil servant, as two of her major inspirations. Balachandran said Gopalan used to take his “inquisitive” granddaughter on long walks during her visits to India. “Though I was not around, I understand that she used to ask him quite a lot of questions,” he said.

The vice president-elect has identified herself as a “proud American” but political discussions during the run-up to the US presidential election did have her ethnic identities and cultures as a margin note. There has also been talk about Harris’ Indian origins being played down during her campaign. Balachandran, who worked as a consultant at the Institute of Defence Studies and Analyses, said narratives that assert Harris’ black identity were inevitable considering that her life in the US had shaped her personality and politics.

“Her mother was involved in the civil rights movement in the US. Her youth, her education have all had strong African American influences. It’s natural for these influences to shape your identity,” he said.

Balachandran, who had followed the US election closely, said Joe Biden’s victory was on expected lines. Identified as a policy commentator on India-US relations, Balachandran said a change in the US leadership was unlikely to effect a significant shift in ties between the two countries. “India-US relations remain very strong. Its foundations are far too deep to be seriously influenced by a change of political leadership,” he said.