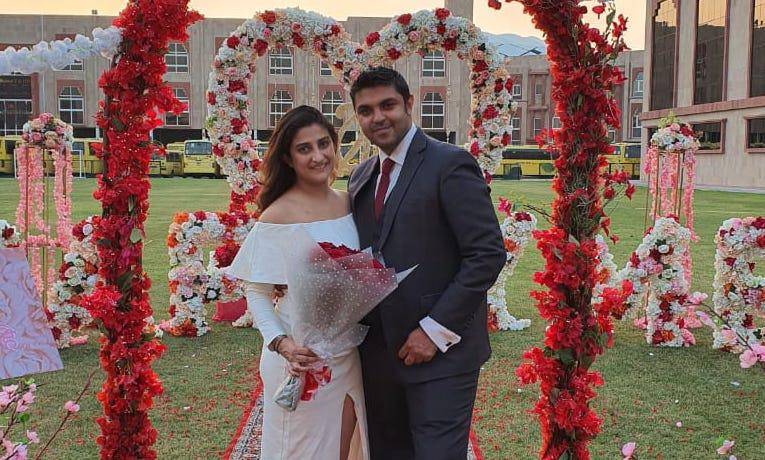 Vijay was in Grade 9 when he fell for the Grade 10 girl.

Indian resident Vijay Valecha has put a ring on his childhood sweetheart’s finger at the same school where they first met some 20 years ago. The Indian High School (IHS) in Dubai transformed into a romantic paradise with flower arches and balloons as Vijay, 35, proposed to Radhika Doshi, 36.

Vijay was in Grade 9 when he fell for the Grade 10 girl.

“I first saw her on the school bus. I had to toil hard to approach her, I didn’t even know her name. I planned our first meeting by getting together with some friends to watch the film Mohabbatein,” said Vijay.

He said their families initially didn’t agree to their relationship. “But all these years, we hung around with each other. We are both career-oriented and our long-distance relationship went on for years.”

The couple is fond of Bollywood. “I always thought I would propose to her in a larger-than-life kind of scenario and make it as special as possible.”

The scheme included five proposals with R, A, D, H and I to spell out her name. “So, the letter R stands for R-adda, a place that played great Bollywood music; the letter A — was for Al Seef Corniche as we went there for most of our dates. D stands for Downtown Dubai where we met on her birthday. H is for a helicopter ride. I (IHS) obviously had to be our school, a place where we have very many fond memories.”

Radhika, who was blindfolded, was at first speechless when she saw her school ground decorated with love.

The bride-to-be said: “For each venue, Vijay gave me cue cards. The school was definitely special as I was entering there after 18 years. My mum was there and she had tears in her eyes. Vijay’s folks were there. The words ‘Marry Me’ were set up in flowers against the backdrop of a huge floral love arch. I incidentally wore a dress that suited the occasion. I was amazed, speechless and nostalgic. He knelt down in front of around 10 people.

“It was like a fairytale proposal. We are due to register our marriage in Dubai this Thursday.”

“In this era, it’s almost like a beautiful fairy tale … two souls who met as children end up together, forever. They graduated from the IHS almost two decades back and have spent the most precious years together at our campus. They have walked the same halls, had the same teachers, played and ate together and, most importantly, they have grown up together at this very place. We are so happy to be such an integral part of their story.”