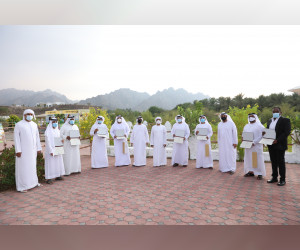 HATTA, 8th November, 2020 (WAM) — Al Khair Voluntary Award honoured, in its fifth award ceremony, today 10 volunteers in Hatta Honey Bee Discovery Centre, Hatta, Dubai.
Salem bin Sultan Al Qasimi, Chairman of the Department of Civil Aviation, Ras Al Khaimah, RAKDCA, and Chairman of the Board of Trustees of the Award, has presented the Certificates of Recognition to honorees while adhering to all the required precautionary and preventive measures.
Firas Aziz bin Darwish, Deputy Chairman of Al Khair Voluntary Award, committee members, and volunteers, attended the honouring ceremony.
During the ceremony, Sheikh Salem Al Qasimi hailed the support given by the wise leadership of the President His Highness Sheikh Khalifa bin Zayed Al Nahyan, His Highness Sheikh Mohammed bin Rashid Al Maktoum, Vice President, Prime Minister and Ruler of Dubai, and His Highness Sheikh Mohamed bin Zayed Al Nahyan, Crown Prince of Abu Dhabi and Deputy Supreme Commander of the UAE Armed Forces, to voluntary work and their support and encouragement of volunteering organisations towards global horizons.
Firas Aziz bin Darwish, Deputy Chairman of Al Khair Voluntary Award, confirmed that the humanitarian and voluntary works are the most prominent sublime and noble qualities of which societies are proud. Such work is a positive practice that embodies the meanings of synergy, cohesion and solidarity to the fullest.
He also explained that it is a reflection of our responsibility towards others and interaction with them and represents an essential tributary for the development of the society. It reflects the extent of volunteer awareness and the role that he played in the progress journey of his country. The voluntary work is considered as an indicator for the progress and prosperity of the nations, as the more the nation develops and advances, the greater its participation in voluntary works and charitable activities.
He also pointed out that the volunteering is inspired by great values and principles and reflects the approach adopted by the UAE since its foundation in terms of giving and providing charitable works for all.