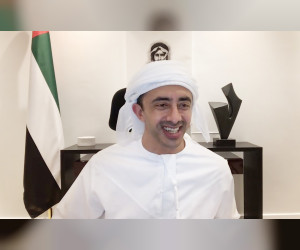 ABU DHABI, 8th November, 2020 (WAM) — H.H. Sheikh Abdullah bin Zayed Al Nahyan, Minister of Foreign Affairs and International Cooperation and Chairman of the Education and Human Resources Council, EHRC, praised the efforts of all education entities, as well as parents and students, in maintaining and supporting the education system, despite the current challenges.
He also stressed that the safety of citizens and residents in the country is a priority of the UAE’s leadership.
Sheikh Abdullah made his statement while heading a virtual meeting of the EHRC, which reviewed the national efforts to ensure continuity of learning during the Covid-19 pandemic.
During the meeting, Sheikh Abdullah stressed that entities in the education sector, both public schools and those in higher education, are providing a healthy and safe academic environment that enables students to succeed, whether in the classroom or through online education.
Hussain bin Ibrahim Al Hammadi, Minister of Education, also reviewed the latest developments in the general framework for managing national educational institutions, as well as the set of protocols, requirements and precautionary measures that all public and higher education bodies must follow, to create a safe and healthy learning environment during the COVID-19 pandemic.
Remote learning in universities is continuous, except special subjects that require the use of laboratories, he added, noting the latest developments related to the working hours of nurseries, early childhood centres and private schools.
He further explained that determining the mechanism of the educational process for the second semester, whether in public or private schools, universities or nurseries, depends on several factors, while highlighting the coordination between concerned authorities.
There are many options and scenarios, and the best ones will be adopted as required, based on the recommendations of competent authorities, in the interest of students, teaching and administrative staff, and their families, he said. He also reviewed a number of educational issues.
The meeting was attended by Hussain bin Ibrahim Al Hammadi, Minister of Education; Noura bint Mohammed Al Kaabi, Minister of Culture and Youth; Jameela Al Muheiri, Minister of State for Public Education; Nasser bin Thani Al Hamli, Minister of Human Resources and Emiratisation; Hessa Essa Buhumaid, Minister of Community Development; Abdullah bin Touq Al Marri, Minister of Economy; Dr. Ahmad Belhoul Al Falasi, Minister of State for Entrepreneurship and SMEs; Shamma bint Suhail Faris Al Mazrui, Minister of State for Youth Affairs; Zaki Nusseibeh, Minister of State and Supreme President of the United Arab Emirates University; Sarah bint Yousif Al Amiri, Minister of State for Advanced Sciences, and several national education officials.