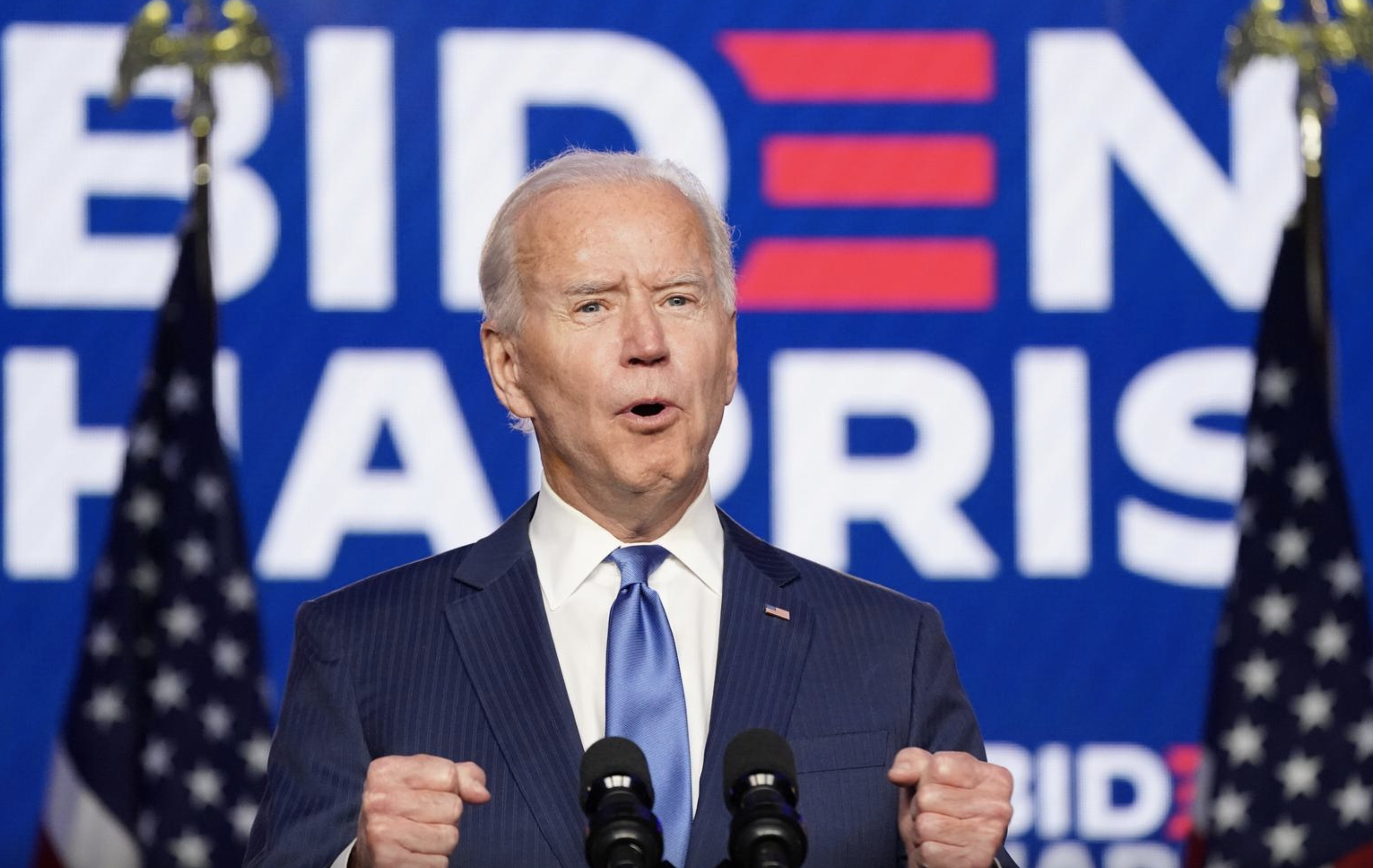 Biden’s victory in the battleground state of Pennsylvania put him over the threshold of 270 Electoral College votes he needed to clinch the presidency.

President-elect Joe Biden declared it was “time to heal” a deeply divided America in his first speech after prevailing on Saturday in a bitter election, even as President Donald Trump refused to concede and pressed ahead with legal fights against the outcome.

Biden’s victory in the battleground state of Pennsylvania put him over the threshold of 270 Electoral College votes he needed to clinch the presidency, ending four days of nail-biting suspense and sending his supporters into the streets of major cities in celebration.

“The people of this nation have spoken. They have delivered us a clear victory, a convincing victory,” Biden told honking and cheering supporters in a parking lot in his hometown of Wilmington, Delaware.

The Democrat pledged that as president he would seek to unify the country and “marshal the forces of decency” to battle the COVID-19 pandemic, rebuild economic prosperity, secure healthcare for American families and root out systemic racism.

Without addressing his Republican rival, Biden spoke directly to the 70 million Americans who cast ballots in support of Trump, some of whom took to the streets on Saturday to demonstrate against the results.

“For all those of you who voted for President Trump, I understand the disappointment tonight. I’ve lost a couple times myself. But now, let’s give each other a chance. It’s time to put away the harsh rhetoric, lower the temperature, see each other again, listen to each other again,” he said.

“This is the time to heal in America.”

He also thanked Black voters, saying that even at his campaign’s lowest moments, the African American community had stood up for him. “They always have my back, and I’ll have yours,” he said.

Biden was introduced by his running mate, U.S. Senator Kamala Harris, who will be the first woman, the first Black American and the first American of Asian descent to serve as vice president, the country’s No. 2 office.

“What a testament it is to Joe’s character that he had the audacity to break one of the most substantial barriers that exists in our country, and select a woman as his vice president,” Harris said.

Congratulations poured in from abroad, including from conservative British Prime Minister Boris Johnson, Canadian Prime Minister Justin Trudeau and German Chancellor Angela Merkel, making it hard for Trump to push his repeated claims, without evidence, that the election was rigged against him.

Trump, who was golfing when the major television networks projected his rival had won, immediately accused Biden of “rushing to falsely pose as the winner.” Clusters of Biden supporters lined two blocks of his motorcade’s route back to the White House.

“This election is far from over,” he said in a statement.

Trump has filed a raft of lawsuits to challenge the results but elections officials in states across the country say there has been no evidence of significant fraud, and legal experts say Trump’s efforts are unlikely to succeed.

As the news of his win broke, cheers and applause were heard around Washington, with people emerging onto balconies, honking car horns and banging pots. The wave of noise in the nation’s capital built as more people learned of the news. Some sobbed. Music began to play, “We are the Champions” blared.

In the Brooklyn neighborhood of Bedford-Stuyvesant, some people erupted in screams of joy as word spread. Several residents danced on a fire escape, cheering while others screamed “yes!” as they passed by.

Trump supporters reacted with a mix of disappointment, suspicion and resignation, highlighting the difficult task that Biden faces winning over many Americans, especially in more rural areas, who believe Trump was the first president to govern with their interests at heart.

“It’s sickening and sad,” said Kayla Doyle, a 35-year-old Trump supporter and manager of the Gridiron Pub on Main Street in the small town of Mifflintown, Pennsylvania. “I think it’s rigged.”

Angry pro-Trump “Stop the Steal” demonstrators gathered at state capitol buildings in Michigan, Pennsylvania and Arizona. Protesters in Phoenix chanted “We want audits!” One speaker told the crowd: “We will win in court!”

There were isolated instances of Trump and Biden supporters confronting one another, as occurred between two groups of about 100 each in Harrisburg, Pennsylvania, but there were no immediate reports of the violence many had feared. The pro-Trump protests mostly faded as the results sank in.

Before the election, Trump refused to commit to a peaceful transfer of power if he lost, and he falsely declared victory long before counting was complete.

The networks’ declaration for Biden came amid concerns within Trump’s team about the strategy going forward and pressure on him to pick a professional legal team to outline where they believe voter fraud took place and provide evidence.

Trump’s allies made it clear the president does not plan to concede anytime soon.

One Trump loyalist said the president simply was not ready to admit defeat even though there would not be enough ballots thrown out in a recount to change the outcome. “There’s a mathematical certainty that he’s going to lose,” the loyalist said.

Biden’s win ends Trump’s chaotic four-year presidency in which he played down a deadly pandemic, imposed harsh immigration policies, launched a trade war with China, tore up international agreements and deeply divided many American families with his inflammatory rhetoric, lies and willingness to abandon democratic norms.

On Saturday, Trump campaign manager Bill Stepien urged supporters to be ready to attend protests or rallies that the campaign is “propping up around the country,” according to a person familiar with the situation.

For Biden’s supporters, it was fitting that Pennsylvania ensured his victory. He was born in the industrial city of Scranton in the state’s northeast and, touting his middle-class credentials, secured the Democratic nomination with a promise to win back working-class voters who had supported Trump in 2016.

He launched his campaign in Pittsburgh last year and wrapped it up with a rally there on Tuesday. It was a tight race in industrial states such as Pennsylvania, Michigan, Wisconsin and Minnesota, but Biden did enough to prevail.

He faced unprecedented challenges. These included Republican-led efforts to limit mail-in voting at a time when a record number of people were due to vote by mail because of the pandemic, which has killed more than 236,000 people in the United States.

When Biden enters the White House on Jan. 20, the oldest person to assume the office at age 78, he likely will face a difficult task governing in a deeply polarized Washington, underscored by a record nationwide voter turnout.

Both sides characterized the 2020 election as one of the most crucial in U.S. history, as important as votes during the 1860s Civil War and the 1930s Great Depression.

Biden’s victory was driven by strong support from groups including women, African Americans, white voters with college degrees and city-dwellers. He beat Trump by more than four million votes in the nationwide popular vote count.

Biden, who has spent half a century in public life as a U.S. senator and then vice president under Trump’s predecessor Obama, will inherit a nation in turmoil over the pandemic and the related economic slowdown, as well as protests against racism and police brutality.

Biden has said his first priority will be developing a plan to contain and recover from the pandemic, promising to improve access to testing and, unlike Trump, to heed the advice of leading public health officials and scientists.

In addition to taming the health crisis, Biden faces a huge challenge remedying the economic hardship caused by COVID-19. Some 10 million Americans thrown out of work during coronavirus lockdowns remain idled, and federal relief programs have expired.

The US economy remains technically in recession, and prospects are bleak for a return to work for millions, especially in service industries such as hospitality and entertainment, where job losses hit women and minorities particularly hard.

Biden also has pledged to restore a sense of normalcy to the White House after a presidency in which Trump praised authoritarian foreign leaders, disdained longstanding global alliances, refused to disavow white supremacists and cast doubt on the legitimacy of the U.S. election system.

Despite his victory, Biden will have failed to deliver the sweeping repudiation to Trump that Democrats had hoped for, reflecting the deep support the president still retains.

This could complicate Biden’s campaign promises to reverse key parts of Trump’s legacy. These include deep Trump tax cuts that especially benefited corporations and the wealthy, hardline immigration policies, efforts to dismantle the 2010 Obamacare healthcare law and Trump’s abandonment of such international agreements as the Paris climate accord and Iran nuclear deal.

Should Republicans keep control of the U.S. Senate, they would likely block large parts of his legislative agenda, including expanding healthcare and fighting climate change. That prospect could depend on the outcome of four undecided Senate races, including two in Georgia that will not be resolved until runoffs in January.

For Trump, 74, it was an unsettling end after an astonishing political rise. The real estate developer who established a nationwide brand as a reality TV personality upset Democrat Hillary Clinton to win the presidency in 2016 in his first run for elected office. Four years later, he becomes the first U.S. president to lose a re-election bid since Republican George H.W. Bush in 1992.

Despite his draconian immigration curbs, Trump made surprising inroads with Latino voters. He also won battleground states such as Florida, where his pledge to prioritize the economy even if it increased the threat of the coronavirus appeared to have resonated.

In the end, though, Trump failed to significantly widen his appeal beyond a committed core of rural and working-class white voters who embraced his right-wing populism and “America First” nationalism.

Duane Fitzhugh, a 52-year-old teacher celebrating Biden’s victory outside the Trump Hotel in Washington, said it was as if an evil enchantment was being lifted.

“It’s like a pall fell over the country four years ago and we’ve been waiting years for it to end,” he said.