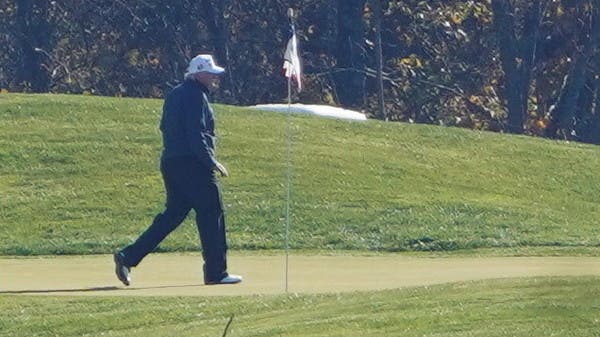 What does a president do when teetering on the verge of electoral defeat, with the entire world watching?

The president left the White House Saturday morning as the last crucial vote counts were about to come in from Pennsylvania and a few other battleground states.

Already trailing Democrat Joe Biden in the all-important, state-by-state Electoral College vote tally — the handwriting on the wall was becoming impossible to ignore.

So Trump, who is known for regularly hitting the links, headed across the Potomac River to the Trump National Golf Course in Sterling, Virginia.

Trump was there when the major US television networks — first CNN then NBC, CBS, ABC and finally Fox — declared that new results from Pennsylvania had pushed Biden over the top — and into the White House, come January.

He was also there when his office released a defiant statement saying Biden was “rushing to falsely pose as the winner.”

But Trump seemed determined to project a sense of serene unflappability when he finished his round in the afternoon. (No score was announced.)

Seeing a wedding couple posing for photos outside the clubhouse, the president offered to join them, videos posted on social media show.

Wearing dark gray slacks, a gray jacket and a white “Make America Great Again” basehall hat, he engaged in what seemed to be lighthearted banter.

As he stepped away, several people shouted after him: “We love you! We love you!”

Afterward, as thousands of exultant Biden supporters celebrated raucously in front of the White House and elsewhere in the US capital, the Trump motorcade made its way back to the White House.

The president had nothing else on his schedule Saturday.

One perhaps small consolation for the avid golfer: Golf Digest magazine once said Trump should be considered alongside John F. Kennedy as the “best golfing president in history.”