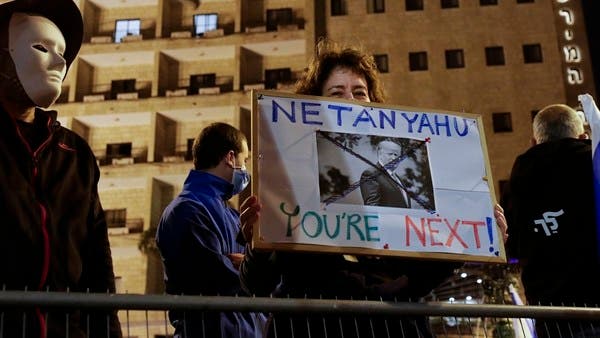 Israelis protesting Prime Minister Benjamin Netanyahu in Jerusalem on Saturday welcomed the news that Joe Biden had defeated President Donald Trump in the US election.

The anti-Netanyahu protesters have been staging weekly gatherings since summer in a bid to force the embattled leader to resign, as he stands trial on corruption charges and is accused of mismanaging the response to the coronavirus pandemic.

“I don’t know if Biden is good or bad for Israel. I hope he will be good. It’s good that the Americans elected him because they didn’t like Trump. Trump did stupid things,” said protester Etty Meidan. “It affected us what he did. And let’s see. Time will tell.”

The protesters are generally considered as more liberal and many object to Netanyahu’s closeness to Trump.

“Trump Down, Bibi to go,” reads a protest banner that used a nickname for Netanyahu.

Despite his stated commitment to bipartisan ties with the US, Israel’s closest and most important ally, Netanyahu has frequently been seen as siding with the Republicans. Netanyahu had a cool relationship with President Barack Obama, appeared to favor Republican challenger Mitt Romney in 2012 and then delivered a major speech to Congress in 2015 to argue against Obama’s emerging nuclear deal with Iran.

After taking office, Trump unilaterally withdrew the US from Iran’s nuclear deal with world powers, winning praise from Netanyahu.

Trump also pushed for the recognition of contested Jerusalem as Israel’s capital, recognition of Israel’s annexation of the Golan Heights and displayed a tolerant approach toward Israeli settlements in the occupied West Bank. He also brought about diplomatic pacts between Israel and three Arab countries.

Biden, the Democratic president-elect, claims “ironclad” support for Israel, wants to curb annexation and has backed a two-state solution in the long conflict between Israel and the Palestinians. He said he would keep the US Embassy in Jerusalem after Trump moved it from Tel Aviv.

In the West Bank, senior Palestine Liberation Organization official Hanan Ashrawi tweeted “America Detrumped!”
“The world also needs to be able to breathe,” she added. “Now is the time for holistic & bold therapeutics.”

The Palestinian leadership suspended contacts with the Trump administration in 2017 after it closed PLO office in Washington and recognized Jerusalem as Israel’s capital. Early this year, the Palestinian Authority severed all ties with Israel and the US after the Trump administration unrolled its Middle East peace plan, which green lights Israel to annex 30 percent of the occupied West Bank, territory sought by the Palestinians as the main component of a future state.

“Trumpism must be carefully scrutinized & remedied to restore the human, moral & legal equilibrium within and beyond the US. Such phenomena do not emerge from a vacuum,” Ashrawi said on Twitter.