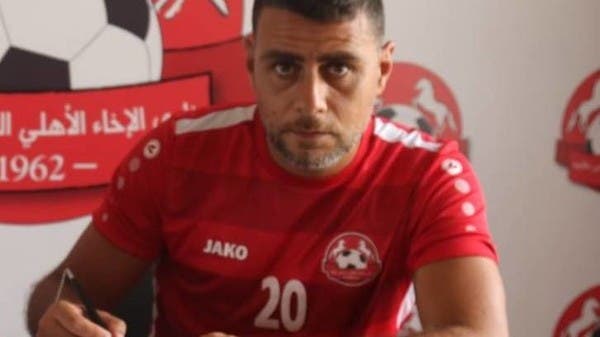 Lebanese football fans woke up Friday to the news that the country’s favorite footballer Mohammad Atwi had passed away, a month after a stray bullet struck his head.

Atwi, a 32-year-old football sensation, was struck in the head by a stray bullet on August 21 after gunfire from a funeral for one of the victims of the Beirut port explosion that left at least 190 dead and thousands injured.

“It is such a hapless and tragic ending for a brilliant player, who also happens to be a young person and newlywed, to have died in those repetitively unfortunate acts of festive gunfire,” football addict Wassim Nsoule told Al Arabiya English.

For some, Atwi’s death was a reminder that anyone in the wrong place at the wrong time in Lebanon could meet the same fate.

Businessman and hardcore football fan Abed Majed told Al Arabiya English that it was a sad thing what had happened and this means anybody walking in the street is vulnerable.

“Given that he is a footballer, people sympathized with him more … but the issue for me is that anyone could be hit with a stray bullet and face Atwi’s same fate,” said Majed.

Football fans across the country took to social media to express themselves and share their shock, sadness, sympathy and disgust as to how such a loveable football star had come to die cheaply and unexpectedly in Lebanon.

“In my country innocent people die in a blink of an eye a stray bullet a blast, fire, fighting each other you are not safe anywhere how sad is everyday life in a beautiful country with no simple human rights to walk freely feeling safe on the streets,” Twitter user Hiba wrote.

Another, Farah tweeted: “Today is a very sad day in #Lebanon … He [Atwi] was a happily married man and a great future awaited him… but not in this country.”

At around noontime the hashtag of Atwi was one of the top trends in Lebanon recording over 5.7 thousand tweets.

Facebook user Mohammad A. wrote “Atwi is in a better place now. He was such a loveable sportsman and the fans’ favorite player especially with the national team. He didn’t deserve in such a tragic and heartbreaking way.”

Atwi was in Beirut’s Al Cola area as mourners shot off rounds of bullets during the funeral of firefighter Joe Bou Saab, who died during the massive blast at Beirut Port on August 4, as earlier reported in Al Arabiya English.

Read more: Beirut firefighters were not given keys, location of burning hanger: The Independent

Twitter user, Rula, wrote: “He succumbed to his injuries with a stray bullet that hit his head during the funeral of one of the #Beirut_Explosion victims. My deepest condolences to his family. A barbaric habit of shooting during funerals and they still choose to do it.”

Atwi had signed a new contract to rejoin the Lebanese football club Tadamon Sour a few days prior to the incident. The bullet penetrated his skull and he fell down unconscious before being rushed to Al Makassed Hospital.

Media reports confirmed the footballer had been in the ICU battling his injury before he passed away on Friday.

“Everything is pricey in this country except life,” read a tweet that was posted by Alaa, adding that ‘Life is cheap here.’

Twitter user, Zainab, wrote: “A sad day. A day when fate decides that you will die wrongfully at the hands of your countrymen. This stray bullet hurts us in you. You will be missed by all of Lebanon and everyone who knew you. Lebanon is wounded and the bleeding will not stop.”

Born in 1987, Atwi was a professional footballer who played as a midfielder for the national team and played for numerous clubs in the Lebanese Premier League’s first division.

Photos of Atwi have been shared widely across social media platforms as thousandss of fans and supporters paid tribute.