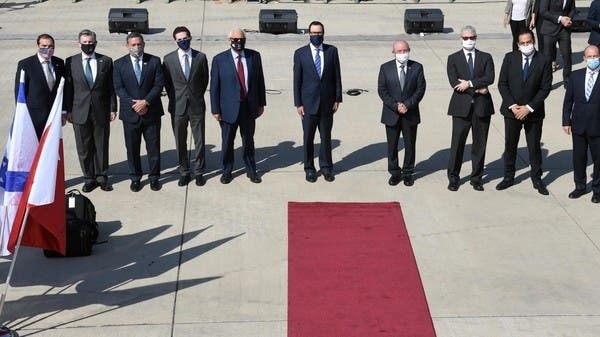 A high-level delegation of officials from Israel and the US arrived in Bahrain on Sunday, marking the first commercial flight from Israel to Bahrain.

US Secretary of the Treasury Steven Mnuchin is leading the group, which will engage in bilateral talks with Bahraini officials before signing memorandum of understandings (MoUs) at around 7:30pm local time to officially establishment diplomatic relations between Bahrain and Israel.

Israel’s Ministry of Foreign Affairs spokesperson Lior Haiat told Al Arabiya English that the historic day is the “start of a new era of peace, prosperity, and stability in the region.”

“We are really grateful for our American friends for helping us,” he added.

US Ambassador to Israel David Friedman and Israeli National Security Council head Meir Ben-Shabbat are part of the delegation.

Another historic day as Treasury Secretary Mnuchin, SE Berkowitz and NSA Ben-Shabbat lead the first commercial flight from Israel to Bahrain, marking yet another step forward implementing the Abraham Accords. Salaam, Shalom and Peace be with us all!! #AbrahamAccords pic.twitter.com/Xpfx68gNQe