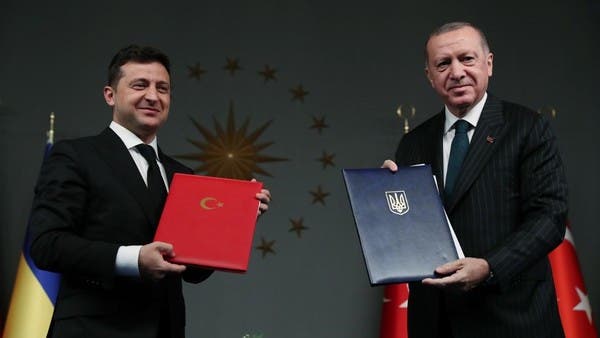 Turkey and Ukraine signed military cooperation agreements in Istanbul on Friday, deepening a defense partnership seen as an effort to counterbalance Russia’s dominance in the Black Sea region.

Ukrainian President Volodymyr Zelenskiy and Turkey’s Recep Tayyip Erdogan oversaw the signing of a “goodwill” agreement concerning the defense industry and a “military framework agreement,” officials said, although details of the agreements were not immediately known.

“Turkey sees Ukraine as a key country for the establishment (of) stability, security, peace and prosperity in the region,” Erdogan said following the signing ceremony between the two Black Sea nations that have been enhancing military ties in recent years.

Zelenskiy said the agreements pave the way for “new opportunities.”

“Cooperation in the defense industry is important for the development of our strategic partnership and I am happy that we are strengthening it today,” he said, speaking through an interpreter.

Last year, Ukraine reached an agreement for the purchase of Turkish-made drones. The two countries are also reportedly engaged in discussions to develop an aircraft engine.

The signing of the agreements comes as the conflict in the Caucasus over Nagorno-Karabakh is putting a strain on Turkey’s relations with Russia. Turkey has backed Azerbaijan in the dispute, while Russia has a military base in Armenia and a security pact requiring Moscow to intervene if its ally is attacked.

In a delicate balancing act, Russia also has sought to maintain warm ties with Azerbaijan and avoid upsetting relations with Turkey.

Although Ankara and Moscow have developed strong economic ties and are accommodating mutual interests in Syria and Libya, the two have an often uneasy relationship and remain geopolitical rivals.

“Turkey has not recognized Crimea’s illegal annexation and it never will,” Erdogan said.

Zelenskiy meanwhile, presented Erdogan with a state medal for his support for Ukraine’s “territorial integrity.”