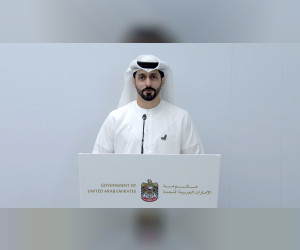 ABU DHABI, 13th October, 2020 (WAM)– The UAE Government today held a media briefing to present the health situation in the country.
During the briefing, Dr. Omar Al Hammadi, Official Spokesperson of the UAE Government, revealed statistics and data monitored by relevant authorities to analyse the health situation in the UAE between 7th and 13th October, 2020.
Al Hammadi announced that during this period, 793,642 coronavirus, COVID-19, tests were performed, a nine percent increase compared to the previous week, which revealed a one percent increase in the number of confirmed cases, accounting for 7,814.
Al Hammadi added that the rate of positive cases revealed by the tests stands at one percent, which is the same rate as the previous week and is lower compared to the European Union, EU, rate of 7.3 percent, the Middle East and North African rate of 6.6 percent, and the Organisation for Economic Co-operation and Development, OECD, rate of 6.3 percent.
Al Hammadi noted that this period witnessed an increase in recoveries by 15 percent compared to the previous week, totalling 9,451 people, adding that the number of deaths decreased by 45 percent compared to the previous week by 13 cases. The UAE’s deaths rate of 0.4 percent is among the lowest in the world, compared to 4.4 percent in the EU, 2.4 percent in the Middle East and North Africa, and 3.7 percent in OECD countries.
Mental health is a key factor in strengthening immunity and avoiding disease Al Hammadi highlighted the importance of taking care of mental health and reinforcing immunity during the current circumstances, affirming that the COVID-19 pandemic has affected mental and social health in the world, and has created a new psychological situation for individuals in different communities due to social distancing and home quarantines.
He also noted that studies revealed that negative mental health can make individuals vulnerable to viruses and weaken the body’s long-term immunity, and chronic negative mental health can increase cortisone levels, which will make people vulnerable to viruses, including influenza.
Al Hammadi then pointed out that continuous psychological pressure may expose individuals to cardiac diseases, stomach ulcers, tumours and psoriasis. Therefore, individuals should take care of their mental health and their surroundings, he added, stressing that fake news and rumours may increase the state of panic in the community.
Al Hammadi highlighted the importance of talking to children about the pandemic honestly and listening to their concerns and handling them correctly, stressing that they should talk to them about ways of preventing the spread of the virus. He also noted the importance of protecting people who are suffering from mental illness, such as depression and insomnia, as well as supporting those in quarantine who contracted the virus, through remote communication.
Al Hammadi said that nice words have a positive effect on everyone while pessimism and negative words may lead to negative implications.