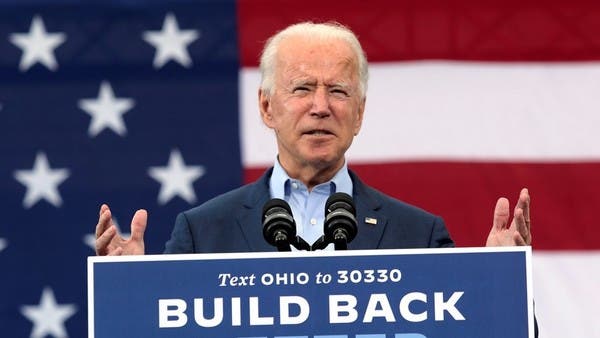 A group of 33 former US ambassadors recently penned an endorsement of Democratic presidential nominee Joe Biden, according to the letter seen by Al Arabiya English.

The list also includes several Middle East experts and analysts based in the US. Claiming that the United States has “lost the trust and friendship of many countries, alienated close allies, emboldened adversaries,” the signatories said they felt confident Biden would reverse this.

In the letter, the main issues touched on involved Lebanon, Palestine and Israel.

Biden, according to the letter, would reinstate aid halted under President Donald Trump to the Palestinian people.

“It is for these reasons among many others that we believe that Joe Biden has the integrity, knowledge, and understanding to initiate and support policies that protect America’s interest and security,” the letter read.

A majority of the 33 ambassadors were appointed by former Presidents Bill Clinton or Barack Obama, who are Democrats. Daniel Benaim, the former Middle East Advisor to VP Biden, was also one of the supporters.

Read more: After US elections, there will be little change in Middle East policy: Experts

Several were appointed by former President George W. Bush or served under the Republican president’s term.

Trump has taken an aggressive approach toward Iran, withdrawing from the Iran deal engineered by Obama and his team.

Washington says the maximum-pressure campaign has drained the Iranian regime of resources previously used to fund militias and proxies worldwide.

Biden and the Democrats have openly stated their willingness to re-enter the Iran deal. However, the recent snapback mechanism that was used by the Trump administration will make it difficult to undo economic sanctions imposed on Tehran.

Democrats also believe the Trump administration has been biased in favor of Israel when dealing with the Arab-Israeli conflict.

However, the United Arab Emirates and Bahrain recently signed normalization deals with Tel Aviv and more Arab countries are expected to follow suit in the near future.

Under the deal dubbed the “Abraham Accords,” Israel halted its annexation of parts of the West Bank and Gaza.

US elections: Thousands turn up for Trump’s 1st public rally since COVID-19 infection