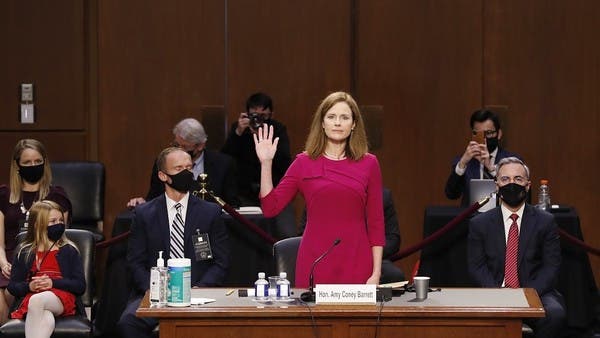 Attention in the United States Monday was focused on the Supreme Court nominee picked by President Donald Trump. Amy Coney Barrett, 48, sat in front of the Senate Judiciary Committee, on the first of a four-day hearing that has further divided the split between Republicans and Democrats.

Trump and his Republican party are pushing ahead with Barrett’s confirmation despite widespread opposition from their political rivals who say a judge should not be named until after the Nov. 4 presidential elections.

Justice Ruth Bader Ginsburg left a vacant seat on the nine-member bench after her death last month. Ginsburg was a liberal. Trump’s nominee is considered conservative.

If Barrett’s confirmation passes – Republicans control the Senate, which approves of justices – this would be Trump’s third pick on the Supreme Court since he took office in 2016.

It would also put the number of conservatives at six compared to three liberal justices, thus giving the Republican-agenda a greater chance of reversing controversial issues, such as abortion, gay marriage and Obamacare.

On Monday, Democratic senators claimed Barrett was a threat to Americans’ health care, in reference to Obamacare.

“They are trying to get a justice onto the court in time to ensure they can strip away the protections of the Affordable Care Act,” said Senator Kamala Harris of California, the Democratic vice-presidential nominee. Harris, speaking from her Senate office because of COVID-19 concerns, also said the confirmation should not go forward so close to the election.

Republicans also warned against making Barrett’s Catholicism an issue in the confirmation debate, especially regarding her stance on abortion, with Sen. Josh Hawley of Missouri lambasting what he called a “pattern and practice of religious bigotry” by Democrats.

In her first comments on Monday, Barrett said she was “humbled” by “this profound responsibility.”