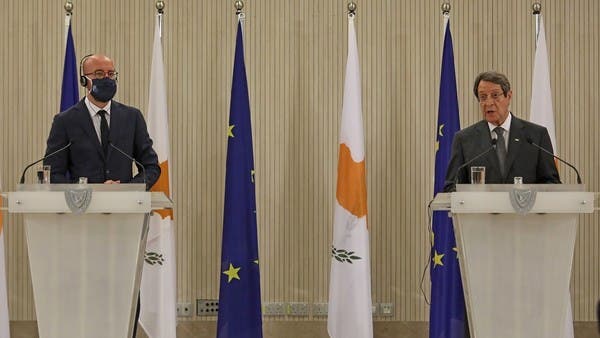 European Council chief Charles Michel pledged Wednesday that the bloc will defend the rights of member state Cyprus in its standoff with Turkey over maritime and energy rights.

Michel’s visit to the island comes a day after Turkey said its Yavuz drillship would continue its search for oil and gas off Cyprus until October 12, despite international calls to withdraw.

The top EU official is in Cyprus ahead of an emergency meeting of EU leaders next week that will address Turkish actions in the eastern Mediterranean with sanctions a possibility.

“The European Union stands in solidarity with Cyprus as it faces a grave situation. That is why we have decided to call a summit on relations with Turkey,” Michel told reporters after meeting Cypriot President Nicos Anastasiades.

“I believe we must be very firm when it comes to defending the rights of all member states, including Cyprus.”

Turkey, Greece and Cyprus have been locked in a dispute over offshore energy rights and maritime borders in the region, with Ankara infuriating the EU allies by sending research ships with naval escorts to work in contested waters.

Although Cyprus has been an EU member since 2004, its jurisdiction is not recognized by Turkey, which dismisses the island’s internationally recognized government as an exclusively Greek Cypriot administration.

There have been fears of conflict erupting and Cyprus is pressing the rest of the EU to impose fresh sanctions on Ankara over the drilling.

Michel said Brussels did not want to send the message that this was a dispute involving only Greece and Cyprus with Turkey as it affected the “rights of the EU.”

He said the bloc should show its readiness to take action to protect its members’ rights.

“Respect for the sovereignty of all member states should remain a rule that no one can ignore or show contempt for,” Anastasiades said.

“As long as there are illegal actions against member states, the EU’s response should be immediate.”

Turkey said the Yavuz will be accompanied by three other Turkish ships, according to a maritime notice that added “all vessels are strongly advised not to enter” the area.

Nicosia said such maritime notices within its jurisdiction were illegal.

Cyprus has been divided since 1974 when Turkey occupied its northern third in response to an Athens-inspired coup in Nicosia seeking to unite the whole island with Greece.

A breakaway Turkish Cypriot state in the north of the island is recognised only by Ankara.

Turkey insists that the minority community’s interests must be protected and has called for the exploitation of offshore oil and gas reserves to be put off until an agreement on reunifying the island has been reached in UN-backed talks.