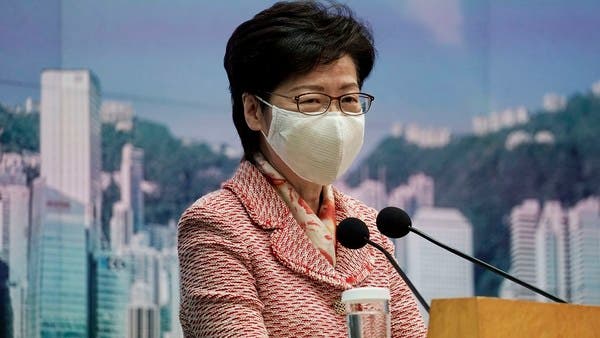 Hong Kong leader Carrie Lam said Monday that her annual policy address scheduled for this week will be delayed until she travels to Beijing to ask the Chinese central government for help with measures to help her city’s battered economy.

Lam’s announcement comes just two days before her policy address was scheduled to take place, and amid reports that Chinese President Xi Jinping would be traveling to the Chinese southern coastal city of Shenzhen, which borders Hong Kong, to commemorate the 40th anniversary of the special economic zone.

The leader of Hong Kong, a semi-autonomous Chinese territory, typically gives a policy address at the start of each legislative year, but Lam said that this is a convention that is not “cast in stone.”

She said she is postponing the address after submitting several proposed measures to Beijing seeking their support to help boost Hong Kong’s economy, which has taken a battering due to the coronavirus pandemic and months of anti-government protests last year.

Lam said at a news conference that she will travel to Beijing at the end of October to participate in meetings with various ministries and commissions and see if the central authorities will support the proposed measures. She declined to give details on the proposals.

Lam added that gaining the support from the central authorities in Beijing would allow her to give an address later in the year that will boost the confidence of the city’s economic revival.

“For our economy to revive, we need the support of the mainland. We have to better integrate into the national development plan,” she said.

“The supporting policies of central authorities would go a long way to boosting the confidence in our economy as well as the revival of economic activity in Hong Kong,” she added.

Lam, who will also travel to Shenzhen with a delegation of ministers from Hong Kong later Monday to take part in the commemoration activities, said she has no scheduled meetings with Xi in Shenzhen. Local media speculated earlier that Lam was postponing her policy address because of Xi’s visit to the Chinese city.

“It is an indisputable fact that Hong Kong’s economic growth is very related to what we are going to do in our work with the mainland economy,” Lam said.