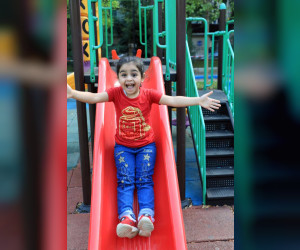 ABU DHABI, 11th October, 2020 (WAM) — A five-year-old Syrian refugee "Sama", living in Lebanon with her family had her eyesight restored through an initiative by H.H. Sheikha Fatima bint Mubarak, Chairwoman of the General Women's Union, President of the Supreme Council for Motherhood and Childhood, and Supreme Chairwoman of the Family Development Foundation.
Sama, who was playing in her modest house was not expecting to become one the victims of the explosion that caused severe damage to Beirut port recently. However, during the explosion, the glass panes in her house shattered and one shard entered her left eye, leading to the loss of vision.
The girl was among the people included in the initiative of Sheikha Fatima, aimed at covering the treatment and rehabilitation of people injured in the Beirut explosion. She underwent an eye transplant and can now lead a normal life.
Sama’s family thanked the UAE and Sheikha Fatima for her generous support and for covering the expenses of the treatment.