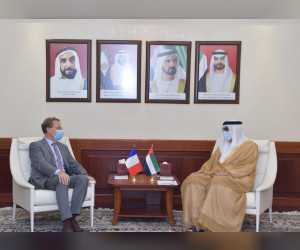 ABU DHABI, 16th September, 2020 (WAM) — Mohammed bin Ahmed Al Bowardi, Minister of State for Defence Affairs, today received the outgoing French Ambassador to the UAE Ludovic Pouille, who paid a farewell on the occasion of the end of his tenure in the UAE.
During the meeting, both sides reviewed the cooperation and between the UAE and France and ways of enhancing and developing them in all areas, especially in defence and the military fields.
Al Bowardi commended the French Ambassador's role in promoting bilateral relations between the UAE and his country, wishing him success in his future assignments.