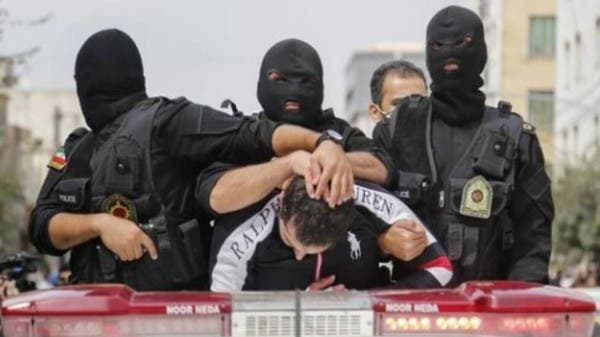 A video of Iranian police officers beating alleged criminals while parading them on the back of police vehicles in public has gone viral this week, sparking outcry on social media.

The video, which was shared on Twitter, showed masked police officers beating alleged criminals in the Iranian capital as they pleaded for mercy, while pedestrians watched on and recorded on their mobile phones.

“Forgive us … it will not happen again,” the detainees are heard saying while being beaten by the officers.

The Islamic Republic parades #Iranians in public as a form of punishment, much like ISIS (Daesh) would elsewhere. The Islamist regime in #Iran is barbaric & belongs to the Middle Ages. pic.twitter.com/X60uEcbl1O

Police officials said the detainees were punished for being “thieves” and “violent thugs.”

“The disturbers of public order and security” were being “taught a lesson,” the semi-official Tasnim quoted a senior police official as saying.

The video caused outcry on social media platforms, with many users describing the police’s actions as “degrading” and “barbaric.”

Iranian legal experts as well as some politicians have said such actions by the police have no legal basis and are an ineffective approach to reducing crime.

Other users have said these police manoeuvres are part of regime efforts to instil fear in citizens to prevent future anti-government unrest.

The only goal behind such actions is “to create fear to prevent upcoming protests,” one user said on Twitter.

Several people described the Iranian police’s actions as “ISIS-like,” recalling footage of ISIS members parading caged captives at the back of pick-up trucks in Iraq in 2015.

When we say Islamic Republic is the original ISIS this is what we mean: in this video, alleged criminals are paraded in the streets and publicly beaten by security forces.
International community must take action to make such a regime accountable for its abuse of human rights. pic.twitter.com/YNQpaSUYLX

Other users questioned what goes on behind closed doors when security forces are this violent to detainees in public.

“Iranian security forces who can be so violent in public, imagine what they are capable of doing behind bars and in dungeons,” one Iranian journalist wrote on Twitter.

A senior military official on Tuesday praised the parading of detainees in public, saying Iran’s top authority, Supreme Leader Ayatollah Ali Khamenei, had demanded that such measures be taken.

“Today, the main demand of the supreme leader is to dry up the roots of insecurity in society,” Majid Mir-Ahmadi, acting deputy for Intelligence in the Iranian armed forces, said.