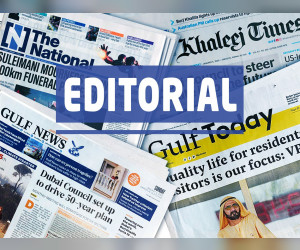 ABU DHABI, 8th October, 2020 (WAM) — The revelation by a World Health Organisation official that roughly 1 in 10 people may have been infected by the coronavirus is startling to say the least, said a UAE newspaper in an editorial on Thursday. "The figure is more than 20 times the number of confirmed cases," noted Gulf Today. The paper added, "The head of emergencies at the world health body, Dr Michael Ryan, sounded out the warning of a difficult period ahead to a special session of the WHO’s 34-member executive board focusing on COVID-19. "The statistics vary from urban to rural, and between different groups, but that ultimately it means 'the vast majority of the world remains at risk.' He said the pandemic would continue to evolve, but that tools exist to suppress transmission and save lives. "Ryan said southeast Asia faced a surge in cases, Europe and the eastern Mediterranean were seeing an increase in deaths, while the situations in Africa and the Western Pacific were 'rather more positive'." However, the editorial pointed out, experts have long said that the number of confirmed cases greatly underestimate the true figure. It continued, "More than 35million people have been reported to be infected by the novel coronavirus globally and over a million have died. "With 209,843 deaths and 7,442,663 confirmed cases, the United States topped the list of twenty countries with the highest recorded infections and deaths in the world, followed by India, Brazil, Russia, France and the United Kingdom among other countries. "There is another alarming finding. Nearly 16,000 daily coronavirus cases went unreported in the UK due to a technical glitch, leading to delayed efforts to trace contacts of people who tested positive. "The glitch occurred on October 2." The paper went on to say that amid all this gloom, comes an interesting revelation. "The UAE has become the first country in the world where the number of coronavirus tests exceeded the total population, with the number of tests performed by national health establishments totalling over 10 million. "Dr. Omar Abdulrahman Al Hammadi, Official Spokesman of the UAE Government, highlighted the statistics and figures monitored by relevant authorities from 30th September to 6th October. They showed that there were 720,802 tests conducted around the country, an eight per cent increase compared to the previous week, which revealed a 16 per cent increase in confirmed infections amounting to 7,704. Accordingly, the rate of positive tests accounted for 1 per cent of the total, which is a similar rate to the previous week. "He also noted that the period under review witnessed an increase in recoveries by 23 per cent compared to the previous week, numbering 8,018 while adding that the number of deaths increased to 19, a rise of 73 per cent compared to the previous week. Al Hammadi then highlighted the UAE’s keenness to continue its achievements in various key sectors, including the education sector, considering its major importance. "He replied to a question on the importance of taking the seasonal influenza vaccine and the risks of catching seasonal influenza and COVID-19 at the same time, especially with the approach of winter. He also noted that influenza is similar to the coronavirus in terms of transmission, most notably through inhaling droplets from coughs and sneezes and touching contaminated surfaces then touching the mouth, nose or eyes. "Al Hammadi revealed that precautions against influenza and the coronavirus infections are the same. These are wearing facemasks, applying social distancing, sanitising hands and refraining from exposure to patients. The difference between the two is the availability of a safe and approved vaccine," it added. It further noted that as global deaths continue to steadily climb, new coronavirus cases are accelerating in more than 70 countries around the world. "The majority of these countries are in the northern hemisphere, where experts fear colder weather could bring more deaths. This is a cause for worry," the Sharjah-based daily concluded.