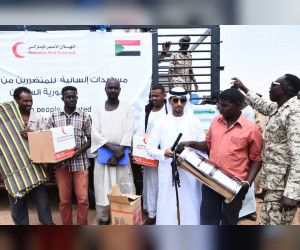 ABU DHABI, 7th October, 2020 (WAM) — The Emirates Red Crescent, ERC, provided further humanitarian aid to people affected by the floods in Sudan, as part of its efforts to ease the suffering of the Sudanese people caused by the natural disaster that hit most of the country’s states.
Over the last couple of days, the ERC dispatched two new convoys from the capital, Khartoum, to the River Nile State and the Northern State, to help the residents of the most affected areas, in cooperation with the UAE Embassy in Khartoum and relevant Sudanese authorities.
Since the start of the crisis, the ERC has sent aid to over 20 areas in eight provinces, benefitting some 35,000 people.
An ERC convoy recently arrived in Merowe in the Northern State around 400 kilometres away from the capital, Khartoum, carrying large quantities of various relief aid, such as food, shelter materials, pesticides and sanitation supplies, benefitting nearly 19,000 people from 13 villages. Another ERC convoy headed to Al Bawga in the River Nile State carrying the same relief materials, benefitting around 3,500 people.
Fahad Abdulrahman bin Sultan, ERC Deputy Secretary-General for Development and International Cooperation, stated that the campaign aims to help those affected by the floods in Sudan and is supported by the ERC’s senior leadership, which directed it to intensify its support for the Sudanese people affected by the floods and provide for their basic needs.
The ERC is exerting significant efforts to reduce the effects of the floods in Sudan by increasing its humanitarian response, he added.