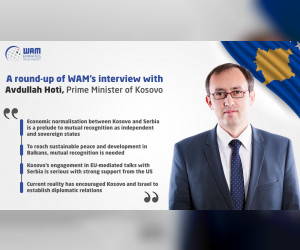 By Binsal Abdulkader ABU DHABI, 7th October, 2020 (WAM) — The Prime Minister of Kosovo, who has signed a historic peace deal with neighbouring Serbia to repair the wounds of the Balkans’ brutal war in the past, believes it is time for good news about peace. "For too long, Balkans have produced bad news. People are now looking forward to good news," Avdullah Hoti, told Emirates News Agency, WAM, in an exclusive interview. About the accord that has been nominated for the Nobel Peace Prize for securing peace between former Balkan war foes, as part of a deal mediated by the US, the Prime Minister said, "We are indebted to the US for getting directly engaged in reaching an agreement on economic normalisation between Kosovo and Serbia as a prelude to mutual recognition as independent and sovereign states on current borders." New chapter with Serbia "The US and its allies have rescued Kosovo [during Kosovo-Serbia war in late 1990s], therefore, we have special relations with the US and its allies. We trust them, we work with them," he added in the interview from Kosovan capital Pristina on Tuesday. Kosovo was the first majority-Muslim country that recognised Israel after the UAE. The Eastern European nation and Serbia signed an agreement to normalise economic ties on 4th September at the White House in the presence of President Donald Trump. In the following week, a Swedish lawmaker announced that he nominated the governments of the US, Kosovo and Serbia for the Nobel Peace Prize for their efforts to secure the peace agreement. Recognising Israel Commenting on Kosovo’s decision to recognise Israel, the Prime Minister said, "Kosovo is a secular parliamentary democracy where all religions are protected by the constitution and laws. The majority of the population is Muslim. We had very good relations with Israel, short of their recognition." He continued, "Current reality has encouraged our countries to establish diplomatic relationships, and Israel has officially recognised Kosovo. We also welcomed recent developments between Israel, UAE, and Bahrain." Avdullah Hoti believes that the Balkans and the Middle East can achieve permanent peace. Peace in Balkans and Middle East "Throughout history, yesterday’s enemies have become today’s allies. Just remember bloody wars between Germany and France, of Denmark and Sweden, the US and Japan, etc. Now they live in peace and prosperity," he pointed out. "Therefore, in the Balkans, and in the Middle East as well, we have to work for peace. Peace is achievable." About his government’s current priorities, 44-year-old Hoti said, "My first and foremost priority is saving the lives of people during this unprecedented pandemic and economic recovery." Towards Serbia – Kosovo mutual recognition The agreement on economic normalisation between Kosovo and Serbia is of great importance, Avdullah Hoti stressed, but to fully recognise each other, a step that is yet to be achieved, is needed for "sustainable" peace. "To reach sustainable peace and development, recognition is needed [between the two countries]. I am committed to working very hard to achieve mutual recognition between Kosovo and Serbia," he said. "We strongly believe that reaching a comprehensive and legally binding agreement for the mutual formal recognition between the two countries is of utmost importance for the future of Kosovo, Serbia, our region as well as Europe." EU-brokered talks Kosovo and Serbia have been negotiating the normalisation of their relations under the European Union mediation since 2012. Serbia fought a fierce war with Kosovan fighters seeking independence during 1998-1999. The war ended after NATO conducted a 78-day airstrike campaign against Serbia. Kosovo was run by the United Nations for nine years before it declared independence in 2008. Most Western nations, except Serbia, have recognised Kosovo’s statehood. Asked about the progress of the EU-mediated talks, the Prime Minister said, "The dialogue has produced several agreements, some of those agreements have been implemented and some not. Whenever the agreements have been implemented, the lives of the citizens of both countries have been improved. Commitment to regional peace "We remain committed to acting as rational and responsible actors in this process. Our engagement in the EU-led dialogue is serious with strong support and coordination with the US, which is Kosovo’s strategic partner. "I would like to stress the fact that the Republic of Kosovo is committed to regional cooperation and good neighbourly relations. As an example of this, we can refer to the excellent relations and close cooperation that we have with our neighbours, including Albania, Montenegro, and North Macedonia," the Prime Minister said. WAM/ Ibrahim Shukralla