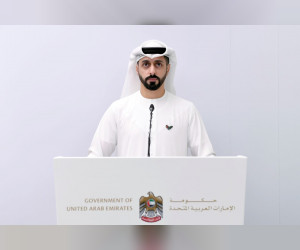 ABU DHABI, 6th October, 2020 (WAM) — The UAE has become the first country in the world where the number of coronavirus, COVID-19, tests exceeded the total population, with the number of tests performed by national health establishments totalling over 10 million.
This statement was made during the regular media briefing held by the UAE Government to present the latest health developments and answer questions and inquiries concerning the public.
Dr. Omar Abdulrahman Al Hammadi, Official Spokesman of the UAE Government, highlighted the statistics and figures monitored by relevant authorities from 30th September to 6th October, 2020.
Al Hammadi announced that this period saw 720,802 tests conducted around the country, an eight percent increase compared to the previous week, which revealed a 16 percent increase in confirmed infections amounting to 7,704. Accordingly, the rate of positive tests accounted for 1 percent of the total, which is a similar rate to the previous week.
He also noted that the period under review witnessed an increase in recoveries by 23 percent compared to the previous week, numbering 8,018 while adding that the number of deaths increased to 19, a rise of 73 percent compared to the previous week.
Al Hammadi then highlighted the UAE’s keenness to continue its achievements in various key sectors, including the education sector, considering its major importance. The education sector managed to achieve record success over a short period of time, due to the readiness of the educational infrastructure of national institutions and the adoption of the latest technologies to ensure the continuity of the education process, along with the implementation of strict precautionary measures to guarantee the safety of students and employees of educational establishments, he further added.
He pointed out that the current academic year is witnessing the continued operation of 1,025 schools around the country under the framework of the remote learning system, accounting for some 82.86 percent of the total number of schools, while 212 schools are operating within the framework of the in-person learning system, representing 17.14 percent of the total.
Al Hammadi explained that the number of school students taking part in the in-class learning system is 201,797, or 17.28 percent of the total number of student population in the country.
During the media briefing, Al Hammadi stressed that the volunteers taking part in the coronavirus vaccine trial should adhere to relevant preventive procedures, including wearing facemasks and maintaining social distancing.
''Taking the trial vaccine doesn't necessarily means a person is far from infection of the virus,'' he explained.
He stressed that after taking the second dose of the vaccine, volunteers will need a period of up to four weeks to enhance their immunity, adding that even after this period, their immune systems will only protect them, not other people and their families and colleagues. ''Therefore, it is essential for them to continue adhering to the precautionary measures,'' he added.
Al Hammadi advised the volunteers and other people to continue adhering to the precautionary measures to protect everyone’s health and safety.
He replied to a question on the importance of taking the seasonal influenza vaccine and the risks of catching seasonal influenza and COVID-19 at the same time, especially with the approach of winter. He responded that catching seasonal influenza and COVID-19 will pose risks to patients, especially given the difficulty in differentiating between the two conditions.
Everyone should help the national health sector by taking the influenza vaccine, which is available at all health centres, Al Hammadi added, highlighting the fact that influenza may only cause mild symptoms in some categories of people, but elderly people and people with chronic diseases may experience serious reactions.
He also noted that influenza is similar to the coronavirus in terms of transmission, most notably through inhaling droplets from coughs and sneezes and touching contaminated surfaces then touching the mouth, nose or eyes.
Al Hammadi revealed that precautions against influenza and the coronavirus infections are the same. These are wearing facemasks, applying social distancing, sanitising hands and refraining from exposure to patients. The difference between the two is the availability of a safe and approved vaccine.
The influenza vaccine does not protect people from COVID-19, but it protects them from catching influenza that may lead to serious complications, he further said while pointing out that the importance of taking the influenza vaccine increases for those suffering from complications and those with a higher risk of transmitting the disease to others, such as medical workers, children below the age of five, smokers, pregnant women and elderly people above 65 years of age, as well as people suffering from diabetes and cardiac, lung, liver and kidney diseases.