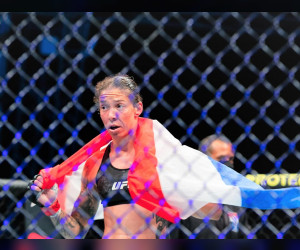 ABU DHABI, 6th October, 2020 (WAM) — Abu Dhabi continues to make history with Return to Fight Island, the mega five-event UFC series taking place on Yas Island. Sunday’s safe and successful hosting of UFC FIGHT NIGHT: HOLM VS ALDANA at Flash Forum, marked the first-ever UFC women’s main event in the Middle East.
The second night on the Return to Fight Island schedule was headlined by former champion Holly Holm and No.6 ranked contender Irene Aldana in a heated bantamweight bout, with Holm claiming victory with a dominant display in the UFC FIGHT NIGHT card’s main event. The third fight on the card witnessed a second women’s bantamweight fight between Germaine de Randamie and No.4 ranked contender Julianna Peña. Female fighters also featured in Sunday’s prelims, as Thailand’s Looma Lookbonmee beat Jinh Yu Frey by judges’ decision in their strawweight bout.
With the Holm-Aldana headliner ensuring a historic night for sports in Abu Dhabi, the bantamweight quartet have been hailed for inspiring female combat sports interest and empowering women across the world to chase their sporting dreams.
"When planning for Return to Fight Island, we discussed how we could possibly improve on the overwhelming success of the inaugural UFC Fight Island. Our aim was to make significant impact and achieve new milestones with this event," said Saeed Al Saeed, Destination Marketing Director at the Department of Culture and Tourism – Abu Dhabi (DCT Abu Dhabi). "We are delighted that Abu Dhabi has become the first city in the Middle East to host a UFC event headlined by women.
"Female empowerment has always been a priority for Abu Dhabi, and our leadership actively encourages young talent to pursue their dreams. Thanks to our grassroots efforts in schools, which includes jiu-jitsu as part of the sporting syllabus, there is already strong interest in female combat sports in the emirate. The athletes who fought here are role models who are driving interest in the sport and showing our youth that anything is possible."
After her impressive victory, Holm, who famously shocked then-champion Ronda Rousey back at UFC 193, and her female counterparts collectively emphasised the role of this event in inspiring aspiring female combat sports athletes in the region.
"It’s nice to play a part in a little bit of history. I always like doing things that have never been done before. I’m very honoured to be a part of that" said Holm. "I hope that anything that we do inspires girls to have the confidence to go out there and do what they want to do, to go and experience it.
"The biggest thing I would tell people who want to become a martial artist is to have patience. It takes a lot of time it doesn’t happen overnight. Just be patient and constantly put hard work into it, things will fall into place."
Aldana, who put on a fine performance against Holm, added: "I hope that I can motivate more girls to be in this sport. It’s a hard sport, but it’s part of women’s evolution and it’s important to learn some things to protect yourself. If you can take it to the professional level, well, it’s a great sport. Just work hard, stay disciplined, be passionate about it and opportunities will come."
She added: "It’s been great to be here and be part of this. I hope we can inspire people. I really believe everybody should be able to do what they wish and if you want to give it a try, do it. Do whatever makes you happy. Hard work will pay off. Continue to live your dreams and go after them."
For her part, Germaine de Randamie, who secured a second-round submission over Julianna Peña, said: "I love being here, and I will always remember that I won my first submission in Abu Dhabi. Thank you for all the support and hospitality you have given us. It is an amazing place, and I am blessed to be here in this event, which I hope will inspire more female fighters to pursue their dreams and never give up. It is not easy to train for professional fights, while you are a police officer; however, I love this sport, and my passion always encourages me to aspire for more".
Elsewhere, Return to Fight Island continues to set new benchmarks. With Abu Dhabi poised to become the first city outside of Las Vegas to host two consecutive UFC numbered events, the pre-fight UFC 253: ADESANYA vs COSTA face-off between Israel Adesanya and Paulo Costa at Flash Forum broke many of the UFC’s social media records and is the sporting franchise’s most viewed face-off ever on Instagram with more than 7.6 million views. The Return to Fight Island series continues on October 11th with UFC FIGHT NIGHT: MORAES VS SANDHAGEN at Flash Forum.
Stringent safety measures are in place for the duration of Return to Fight Island with everyone inside the Yas Island ‘safe zone’ being tested regularly. Abu Dhabi has also led the development of the Go Safe Certification, a health and safety programme that enforces global safety and hygiene standards across the emirate’s hotels, attractions, malls, hospitality facilities and public venues. The emirate’s commitment to health and safety during Return to Fight Island supports Abu Dhabi’s wider efforts to combat the spread of COVID-19, which include widespread testing, city-wide sanitation, social distancing, and enhanced healthcare services.