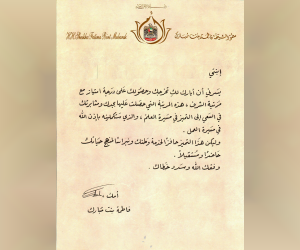 ABU DHABI, 6th October, 2020 (WAM) — H.H. Sheikha Fatima bint Mubarak, Chairwoman of the General Women's Union, President of the Supreme Council for Motherhood and Childhood, and Supreme Chairwoman of the Family Development Foundation, has sent a congratulatory letter to every graduate of the 39th batch of female students from UAE University, UAEU, the 18th batch from Zayed University, ZU, and the 29th batch from the Higher Colleges of Technology, HCT, totalling 506 students who were unable to attend their graduation ceremonies this year due to the coronavirus, COVID-19, pandemic.
H.H. Sheikha Fatima bint Mubarak wished the graduates success and urged them to continue their hard work and efforts to enhance their innovative capacities and serve the nation.
She also lauded the role of the universities in supporting higher education and keeping pace with the technological and scientific developments of the best academic institutions, stressing that the graduates have achieved significant progress due to their hard work and persistence, enabling them to contribute to building the country.
Sheikha Fatima then reiterated her appreciation to the graduates and their families while stressing her support and pride for the achievements of women in the UAE.
Hussain bin Ibrahim Al Hammadi, Minister of Education, thanked Sheikha Fatima for her constant keenness to honour and motivate female students, whom he congratulated for their outstanding results, which is due to their hard work and determination.
Noura bint Mohammed Al Kaabi, Minister of Culture and Youth and President of Zayed University, said, "The celebration of Sheikha Fatima, the pioneer of the renaissance of Emirati women, for the success of these outstanding female students has become an annual event that all graduates, their universities and families look forward to everywhere, as it highlights the mother’s support for her daughters and their empowerment."
Al Kaabi then congratulated the graduates, stressing that they are close to leading the future of the country, as they are the "generation of possibilities" whose determination is growing stronger by the day, and their futures are promising due to the belief, confidence and support of the country’s leadership, which has paved the path for their success by drafting laws and initiatives that enable women to progress and help strengthen the country’s leadership and competitiveness in the areas of technology, artificial intelligence and space.
Saeed Ahmed Ghobash, Chancellor of UAEU, said that the graduation ceremony, under the patronage of Sheikha Fatima is a precious event for the outstanding students amidst the current circumstances facing the world caused by the COVID-19 pandemic.
Nasser bin Thani Al Hamli, Minister of Human Resources and Emiratisation, stressed that Sheikha Fatima’s patronage for the event reflects her constant support for Emirati women and motivates them to excel and pursue scientific excellence.
Dr. Maitha Al Shamsi, Minister of State, expressed her appreciation for the pioneering role of Sheikha Fatima in empowering Emirati women and encouraging female students while congratulating the graduates and wishing them success, and thanking the academic staff of the three academic institutions.
The graduates thanked Sheikha Fatima, the "Mother of the UAE," for her constant support and pledged to continue their journey of hard work and excellence.