A player taking part in the ongoing Indian Premier League (IPL) tournament said he was asked to leak information about his team, the country’s cricket anti-corruption chief told AFP Sunday.

The world’s richest cricket league, long plagued by corruption, is in its third week and is being played behind closed doors in the United Arab Emirates because of the coronavirus pandemic.

All eight teams are confined to separate “bio-bubbles”. 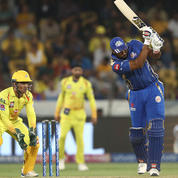 Indian tour operators, airlines have yet to see any increase in bookings related to the Indian Premier League which starts in the UAE next week

“A player has been approached. He himself immediately reported it,” anti-corruption chief of the Board of Control for Cricket in India (BCCI) Ajit Singh told AFP.

“We know who has approached… We are on the case.”

Singh said the “relatively unknown” player, whose identity was not released, was asked to leak some information about his team.

He did not release further details about the incident.

Singh told AFP before the tournament started that the bio-bubbles would make it easy for any illicit approaches to be noticed.

The BCCI last month struck a deal with Sportradar, a technology company that tracks online betting.

The money-spinning IPL has a long history of corruption and match-fixing since it started in 2008.

Bangladesh all-rounder Shakib Al Hasan was suspended last year for failing to report corrupt approaches, one of them involving the IPL.

A 2013 scandal caused the Chennai Super Kings and Rajasthan Royals to be suspended in 2015 for two seasons.

The matches are being played in Sharjah, Abu Dhabi and Dubai, with the 53-day league ending on November 10.