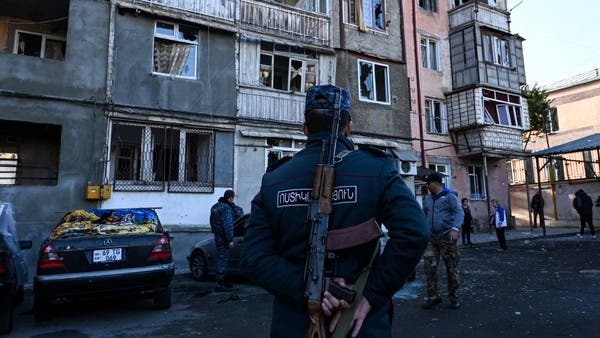 With dark circles under their eyes and worried looks, dozens of people are gathered at Armenia’s border with Nagorno-Karabakh, trying to get a lift in one of the passing cars.

“Are you going to Yerevan?” they ask, desperate to get to the Armenian capital after escaping the fighting between Armenian and Azerbaijani forces over the disputed region.

Entire families have arrived in Goris, a border town in southeastern Armenia, fleeing a fresh outbreak of the fighting over the region, which erupted last Sunday and has so far left more than 200 dead.

The clashes have intensified in recent days, with the regional capital Stepanakert under heavy rocket and artillery fire.

Many of the city’s more than 50,000 residents have fled to Goris as a first step to reaching Yerevan, 350 kilometers (220 miles) to the northwest.

Cars and trucks are depositing them at the entrance to the city, in front of a grey Soviet-style hotel, a few steps from a neon-lit gas station.

There, they gather looking for a ride, a friend — any way of reaching the safety of Yerevan.

Women, many of them visibly exhausted, sitting on their bags, their children playing nearby. The men look for opportunities for a ride among the passing vehicles, taxis or sometimes the purple public buses that the authorities are sending to fetch them.

“How many are you? Do you want us to take you?” asks Ani, a 31-year-old who arrived in her green Clio from Yerevan.

She works as a journalist but dropped everything to rush to the border.

“I didn’t have the distance I needed to do my job,” she says. “I told them ‘forget about me’.

“There are hundreds of displaced people arriving from Stepanakert where the bombing was heavy today. We have to help them, one way or another.”

In Yerevan, those fleeing the fighting stay with friends and family or are put up in hotels and schools free of charge. Authorities are collecting food, clothing, money and even toys for them.

“The whole country is on the front. It has always been like this in the difficult moments of our history,” says Ani.

For now, the number of people fleeing is limited — they leave by car, a few at a time, with no signs yet of a mass exodus.

But the military trucks and ambulances that pass them on the road are a reminder that this conflict is far from over.