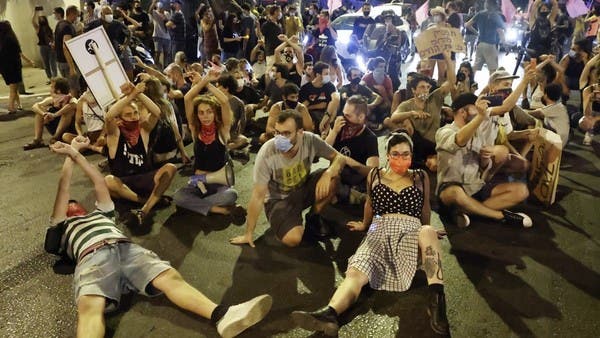 Israelis opposed to Prime Minister Benjamin Netanyahu and his handling of the coronavirus pandemic protested around the country Saturday night, despite new restrictions on public assembly.

Protesters seemed to be widely using protective masks, but a police statement said they were intentionally breaching social distancing rules and those limiting numbers.

Police did not give an estimate on how many were involved.

Parliament on Wednesday approved a law restricting demonstrations as part of a coronavirus-related state of emergency, that critics say is aimed at silencing protests against Netanyahu.

On Friday, Tourism Minister Asaf Zamir, of the centrist Blue and White party quit Netanyahu’s coalition government over the restrictions.

Announcing his decision on Twitter he said that Netanyahu was more concerned about his ongoing corruption trial and the growing public protest than about fighting a second wave of COVID-19.

“I am not willing to put up for another minute with a reality in which the right to demonstrate is restricted,” he wrote. “Therefore, I must follow my conscience.”

Blue and White leader Benny Gantz named the party’s Orit Farkash Hacohen to replace Zamir and the coalition did not seem to be in immediate danger, although commentators speculated that other resignations could follow.

“We joined the government to rein in the coronavirus, not to curb democracy or the rule of law,” Gantz said.

The new regulations bar demonstrators from travelling more than one kilometer (0.6 mile) to attend protests, but the left-wing Haaretz newspaper reported Friday that apps had sprouted on social media giving users locations of protests near their homes.

Police were rigorous in checking people’s identity cards, issuing spot fines to those found to have broken the limits and “arresting those disturbing public order”, a statement said.

It did not say how many arrests were made but said “hundreds” of fine notices were issued for various breaches of the emergency regulations.

In Jerusalem Israeli media estimated that around 200 people were protesting outside Netanyahu’s official residence, a marked contrast with the thousands who were there a week earlier.

Other protests were held in a number of towns.

Although a general lockdown went into force on September 18 protest was considered a protected activity until Wednesday’s parliament vote.

The new law gives the government powers to declare a “special emergency caused by the coronavirus pandemic” for renewable periods of one week.

With over 260,000 coronavirus infections confirmed so far and over 1,600 deaths in a population of nine million, Israel currently has the world’s highest weekly infection rate per capita.