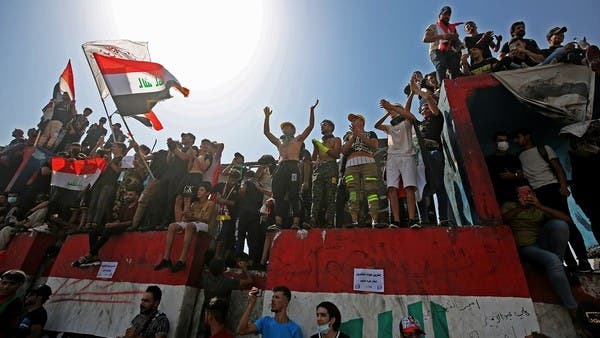 Thousands of Iraqis gathered on Thursday in the capital Baghdad and in the country’s south on the first anniversary of the start of unprecedented protests demanding the fall of the ruling class.

The protests, which were sparked in October last year and lasted months before running out of steam, will be revived, demonstrators said, if no reform is carried out by the current government.

The mass demonstrations across southern Iraq demanded youth employment, functioning public services and the guarantee of transparent elections, in a country beleaguered by corruption and caught in the crossfire of a tug-of-war for influence between Washington and Tehran.

One year, and nearly 600 deaths later, after the worst social crisis in Iraq’s recent history, the mood in the country is very different.

Prime Minister Mustafa al-Kadhimi, who was appointed in May, has praised the very demonstrations that pushed out the previous government.

State television broadcast on Thursday clips showing photos of the “martyrs” accompanied by the national anthem played on electric guitar.

But in Tahrir Square, epicenter of Baghdad protests, and in the southern city of Diwaniya, protesters rejected the outstretched hand of the government and various parties, which are preparing for elections scheduled for June.

“The old government and the new one have made a lot of promises, but nothing has happened,” said demonstrator Hassan al-Miyahi in Diwaniya.

Around him people shouted the main slogan of the Arab Spring uprisings: “The people want the fall of the regime.”

“Today, we remember those who died to take our country back from the thieves,” 28-year-old Ibrahim told AFP in Tahrir Square.

Another Baghdad protester said the demonstration was “a taster”.

“If the government doesn’t act and doesn’t liberate protesters still in detention, our next appointment is set for October 25,” he said.

This year, “if the government doesn’t respond to our demands, we will all go to Baghdad to take the Green Zone”, the high-security area where authorities are based, said Marwan Hamid, a student in Diwaniya.

“We’ll dissolve parliament and form an interim government to put an end to organized corruption and the parties and militias that answer to foreign powers,” he added.

Number one issue in Iraq is the question of pro-Iran militias: Expert