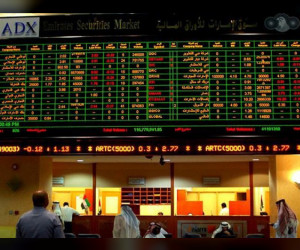 ABU DHABI, 1th October, 2020 (WAM) — Arabs traded to the tune of AED15.4 bn of shares during the first nine months of 2020, or 8.3 percent of the total value of transactions conducted across the Abu Dhabi and Dubai financial markets during this period, which stood at AED184 bn, according to the figures released by the two bourses.
The figures show a growth of 48 percent in Arab trades in the twin bourses as compared to the same period last year, mainly due to the higher dividends and better value they get than on other stock markets in the region.
The statistics confirm more tendency among Arab investors to invest on the Dubai Financial Market, with a total value of AED13.08 bn, AED6.6 bn of which were purchases and AED6.48 bn were sales. On the Abu Dhabi Securities Exchange, their total trades hit AED2.317 bn.