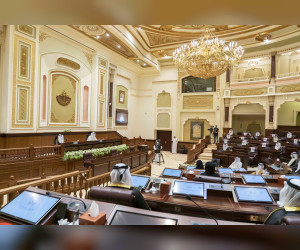 SHARJAH, 1st October, 2020 (WAM) — Under the patronage of H.H. Dr. Sheikh Sultan bin Muhammad Al Qasimi, Supreme Council Member and Ruler of Sharjah, H.H. Sheikh Sultan bin Mohammed bin Sultan Al Qasimi, Crown Prince and Deputy Ruler of Sharjah and Chairman of Sharjah Executive Council, today inaugurated the second ordinary session of the tenth legislative term of Sharjah Consultative Council, SCC.
Sheikh Sultan was received by Sheikh Salem bin Abdulrahman Al Qasimi, Chairman of the Sharjah Ruler's Office, Ali Mehad Al Suwaidi, Chairman of SCC, Mohamed Obaid Al Zaabi, Chairman of Department of Protocol and Hospitality, Dr. Mansour bin Nassar, Head of Sharjah Government Legal Department, Asma Rashid bin Taliah, Secretary General of SEC, and Ahmed Saeed Al Jarwan, Secretary General of SCC.
The ceremony began with the arrival of Sheikh Sultan to SCC’s hall, along with the playing of the UAE’s national anthem, after which the attendees listened to a recitation of verses from the Holy Quran.
On this occasion, Sheikh Sultan delivered a speech conveying the greetings of the Ruler of Sharjah, and wishes of success, highlighting His Highness’ confidence in SCC to achieve the desired goals and take into account public interests.
He continued, that since its inception, SCC has lived through important events and public affairs at the level of the Emirate of Sharjah, and has presented legislative and supervisory achievements and other constructive recommendations and proposals that helped in supporting the process of development. Sharjah Crown Prince stressed the need for perseverance, sincerity and dedication in performing duties of SCC, in order to achieve prosperity and success.
Then Sharjah Crown Prince and Deputy Ruler of Sharjah authorised the convening of SCC's second ordinary session of the tenth legislative term.
After that, the Secretary-General of SCC read the Emiri Decree No. 28 of 2020 regarding the invitation of the Sharjah Consultative Council to convene in its second ordinary session of the tenth legislative term.
Ali Mehad Al Suwaidi, Chairman of SCC, delivered a speech welcoming Sharjah Crown Prince and Deputy Ruler of Sharjah, and appreciating the honour of the opening of the second ordinary session of the tenth legislative term of SCC. As such an occasion comes as a continuation of the footsteps of His Highness Sheikh Dr. Sultan bin Mohamed Al Qasimi to serve the public and thanking the efforts exerted by SEC and competent authorities in light of the coronavirus pandemic.
After the opening ceremony, SCC held its first procedural session chaired by Ali Mehad Al Suwaidi, during which the council approved maintaining the formation of the permanent committees of SCC, as well as maintaining SCC’s monitors, namely: Mohammed Ali Jaber Al Hammadi and Mohammed Saleh Abdullah Al Ali.
Then SCC reviewed the decree-laws issued during the period of SCC’s absence.
WAM/Tariq Al Faham