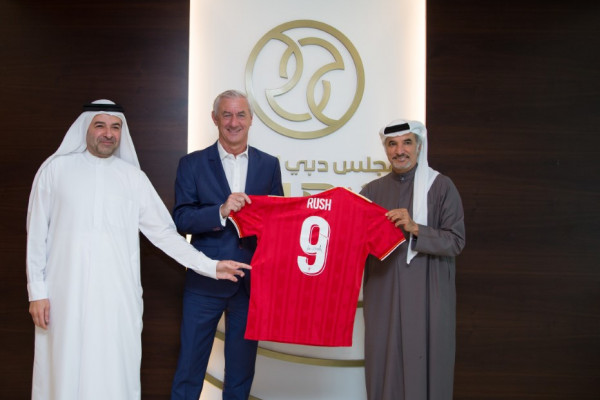 The Welshman, who presented one of his autographed Liverpool jersey to the Council and received a copy of “My Story” – the anecdotal memoir of His Highness Sheikh Mohammed Bin Rashid Al Maktoum, Vice President and Prime Minister of UAE and Ruler of Dubai – discussed several projects and initiatives at the meeting and Rush expressed his desire to work alongside Dubai Sports Council, especially at the academy level, for the betterment of football here.

Welcoming Rush and appreciating his desire to launch projects in Dubai, Saeed Hareb said Dubai Sports Council is always ready to support projects and initiatives that enrich and enhance Dubai’s burgeoning sports sector and added that any project bearing the name of a legend like Ian Rush is bound to generate plenty of interest given the admiration he enjoys among football fans around the globe.

Saeed Hareb also gave the 59-year-old Welshman a tour of the Council’s headquarters, and briefed him on the role Dubai Sports Council plays in promoting sports and physical activity among the different segments of Dubai’s diverse community, and in encouraging and attracting investments from the private sector and individuals, as well as in in promoting sports tourism, both domestic and international, to places like Al Marmoom Desert Conservation Reserve and Hatta, and some of Dubai city’ most iconic spots and destinations.

Rush, of course, is not a newcomer to Dubai. A frequent visitor, the Welshman is always amazed to see the changes every time he returns.

“I have been to Dubai many, many times and it’s an absolutely fantastic place,” Rush said. “Last time I was here, it was two years ago and to come to Dubai again and see such incredible places is absolutely amazing. Things are getting better and better each time in Dubai.”

A Member of the Most Excellent Order of the British Empire (MBE) and widely regarded as one of the greatest strikers of his generation, Rush is Liverpool’s all-time leading goalscorer with a total of 346 goals in all competitions during his two stints at the club – from 1980 to 1987, and then from 1988 to 1996.

Rush is regarded as one of the greatest ever Liverpool players and he came third in the 100 Players Who Shook The Kop – an official Liverpool fan poll. In his glorious career with The Reds, he won two UEFA European Cup (now UEFA Champions League), five domestic league titles, three FA Cups, five League Cups, one Football League Super Cup, and three FA Charity Shield.

At international level, Rush made 73 appearances for the Wales national football team and remained the record goalscorer for his country until 2018.